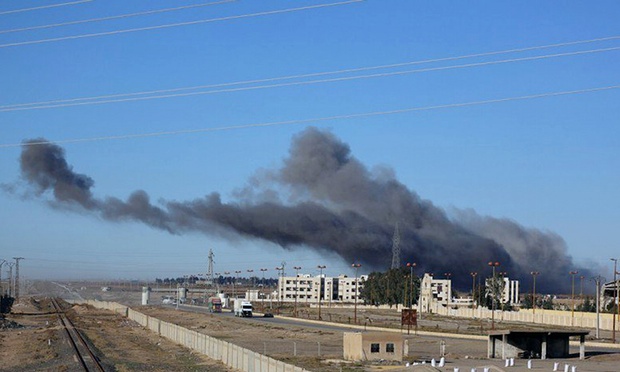 The United States “dodged a bullet in Syria… all courtesy of the Israelis,” former US Vice President Dick Cheney’s national security adviser asserted on Monday.

John Hannah, a senior fellow at the DC-based think tank the Washington Institute for Near East Policy, was referring to Operation Orchard, Israel’s September 6, 2007 bombing of the North Korean-built, plutonium-producing nuclear reactor in the town of Al-Kibar, in the desert east of Damascus.

“Not only did [the Israelis] discover [it] in the nick of time,” Hannah wrote in the journal Foreign Affairs. “They also carried out the attack that was almost certainly the only means of ensuring the reactor never went hot.”

In his piece, titled “It’s the Proliferation, Stupid,” Hannah recounted the day he received an urgent call from Cheney “to drop everything and get over to his White House office. The head of Israel’s Mossad, the late Meir Dagan, had just been in to brief Cheney and President [George W.] Bush. What he revealed was chilling: “compelling evidence” that North Korea was covertly building in Syria “more or less a replica” of its own reactor at Yongbyon – and that it was “perilously close to completion.”

“Options for getting rid of it would narrow considerably once operations began and the reactor went ‘hot,’” he continued. “At that point, any effort to destroy it through military strike or covert action would run a high risk of dispersing deadly radioactive materials that could poison thousands of innocent civilians.”

Calling the Syrian civil war a “strategic catastrophe” — after raking the US intelligence community over the coals for having “totally missed Al-Kibar” and being “completely taken aback by Dagan’s stunning revelations” — Hannah added, “[J]ust imagine the nightmare that the world would have faced if, on top of everything else, we were also dealing with the nightmare of the Islamic State getting its hands on a plutonium-producing nuclear reactor.”

Hanna used the story of active North Korean involvement in Syria nine years ago to warn against its behavior today. “The greatest threat we face from [Supreme Leader] Kim Jong Un is probably not a suicidal attack against the United States or our allies in Northeast Asia with nuclear missiles. Rather, the more likely danger is that North Korea’s tyrant sells part of his ever-expanding nuclear arsenal to other rogue actors that mean us harm,” he wrote, going on to identify Iran and its proxy, Hezbollah, as particularly worthy of note and monitoring.

As a result of last summer’s nuclear deal, Iran is supposed to restrain its program for the next decade or so, while submitting to greater international scrutiny on its territory. In exchange, it will get tens of billions of dollars in cash and the ability to once again sell as much oil as it can on international markets. For its part, North Korea is cash and oil poor but under no such nuclear restrictions…The potential for synergy between these two rogue states and longtime proliferation partners is more than obvious. Especially in the wake of new U.N. sanctions, Pyongyang is desperate for money and fuel. Iran has ample quantities of both, but needs a place beyond the IAEA’s reach where its nuclear weapons efforts can advance covertly over the next decade…

[W]e’ve had ample warning for decades that almost anything is possible. Pyongyang has more than proven its readiness to sell some of the world’s most dangerous weapons and technology to the world’s most dangerous actors, so long as there is money to be made and no serious chance of meaningful punishment for its transgressions. As the North’s nuclear arsenal grows in size and sophistication, as its economic straits grow more desperate, and as the rhetoric and actions of its mercurial young dictator grows more bellicose and erratic, we should expect the worst from Pyongyang, while acting now to develop the necessary capabilities, strategies, and policies to ensure it never happens.

Israel’s airstrike on the Al-Kibar reactor was carried out during the tenure of former Prime Minister Ehud Olmert, who is currently serving a jail sentence for a corruption and bribery case involving his term as mayor of Jerusalem from 1993-2003.

It is only recently that Israel has begun informally to acknowledge conducting the airstrike, which Syria also kept under wraps.

According to Bush’s 2010 memoir, Decision Points, Olmert was “not pleased” with the strategy of the White House, which was to use diplomacy rather than “bomb… a sovereign country with no warning or announced justification.”

Bush wrote: “Prime Minister Olmert hadn’t asked for a green light, and I hadn’t given one. He had done what he believed was necessary to protect Israel.”

This was not the first time that Israel had launched a strike to prevent a nuclear site from going “hot.” On June 7, 1981, under the premiership of the late Menachem Begin, the Israel Air force carried out Operation Babylon, a strike on a nuclear reactor in Iraq. The attack was harshly criticized by the United States under President Ronald Reagan and condemned by the UN Security Council.