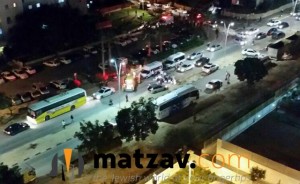 A terror attack occurred in Kiryat Gat on Motzoei Shabbos when a terrorist armed with a knife assaulted a number of pedestrians on Rechov Dovid Hamelech in the city.

The attacker reportedly managed to stab four people and cause minor to moderate injuries before fleeing the scene on foot.

Local police were called to the scene and Magen David Adom paramedics treated the victims, who were rushed to Barzilai Hospital in Ashkelon.

The terrorist is still at large.