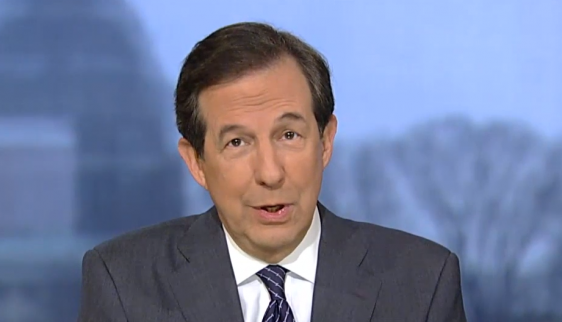 Fox News anchor Chris Wallace cautioned his colleagues and the network’s viewers Sunday that President Donald Trump’s latest attack on the media had gone too far.

“Look, we’re big boys. We criticize presidents. They want to criticize us back, that’s fine,” Wallace said Sunday morning on “Fox & Friends.” “But when he said that the fake news media is not my enemy, it’s the enemy of the American people, I believe that crosses an important line.”

The “Fox & Friends” anchors had shown a clip of Trump recounting that past presidents, including Thomas Jefferson and Abraham Lincoln, had fought with the press. They then asked Wallace whether Trump’s fraught relationship with the media was a big deal.

In response, Wallace told his colleagues that Jefferson had also once written the following: “And were it left to me to decide whether we should have a government without newspapers, or newspapers without a government, I should not hesitate a moment to prefer the latter.”

Context was important, Wallace said. All presidents fight with the media, but Trump had taken it a step further in making them out to be “the enemy,” he added.

“Yes, presidents have always had – and politicians have always had – problems with the press. They want good press. The press doesn’t always give it to them,” Wallace said. “But what Jefferson (was saying) is, despite all of our disputes, that to the functioning of a free and fair democracy, you must have an independent press.”

Trump’s contentious relationship with the press has again been in the spotlight in recent days after the president repeatedly attacked the media as “fake news” in several tweets. In one widely shared tweet on Friday, Trump said the media was “not my enemy” but “the enemy of the American People!”

In it, Trump tagged the New York Times, CNN and the broadcast news networks NBC, ABC and CBS. He did not mention Fox News, which has usually been exempted from his anger toward the media – a fact that Wallace acknowledged Sunday.

“We can take criticism, but to say we’re the enemy of the American people, it really crosses an important line,” Wallace said.

On “Fox & Friends,” host Pete Hegseth countered that perhaps Trump was “taking on the hidden bias” of news outlets that “tell you they’re unbiased.”

“Is there something there?” Hegseth asked Wallace. “It’s not about the independent press; it’s about the bias of the press.”

Wallace replied: “I think there’s absolutely something there, and if he had said that, you wouldn’t have heard a peep out of me. Lord knows, Barack Obama criticized Fox News. If Donald Trump wants to criticize the New York Times, that’s fine. But it’s different from saying that we are an enemy of the American people. That’s a different thing.”

Wallace finished with a word of warning to those watching who might agree with Trump because he happened to be a president who shared their views.

“And I know there are a lot of (Fox News) listeners out there who are going to reflexively take Donald Trump’s side on this,” he added. “It’s a different thing when it’s a president – because if it’s a president you like trying to talk about the press being the enemy of the people, then it’s going to be a president you don’t like saying the same thing. And that’s very dangerous.”

Wallace is the host of “Fox News Sunday” and was the moderator of the third presidential debate between Trump and Hillary Clinton.

Meanwhile, White House Chief of Staff Reince Priebus also appeared on “Fox News Sunday,” where he and Wallace sparred over the president’s words.

Priebus defended Trump by saying that he was not talking about all news but about “certain things that are happening in the news that just aren’t honest.”

Wallace pressed Priebus and argued that the president was not referring to individual stories.

“You don’t get to tell us what to do any more than Barack Obama did,” Wallace said after continued arguments with Priebus. “Barack Obama whined about Fox News all the time, but I got to say, he never said that we were an enemy of the people.”

Wallace is not the only high-profile figure to disagree with Trump’s declaration about the media. On Sunday, Defense Secretary Jim Mattis said he did not have any issues with the press and did not see the media as the enemy.

In an interview on NBC’s “Meet the Press” that aired Sunday, Sen. John McCain, R-Ariz., said making moves to shut down a free press was “how dictators get started.”

“In other words, a consolidation of power,” McCain told “Meet the Press” host Chuck Todd from Munich. “When you look at history, the first thing that dictators do is shut down the press. And I’m not saying that President Trump is trying to be a dictator. I’m just saying we need to learn the lessons of history.”

The 80-year-old senator told Todd that a free press was central to a functional democracy, even if news organizations’ stories challenged those being held accountable.

“I hate the press. I hate you, especially,” he said to Todd, who laughed. “But the fact is, we need you. We need a free press. We must have it. It’s vital.”

“If you want to preserve democracy as we know it, you have to have a free and, many times, adversarial press,” McCain added. “And without it, I am afraid that we would lose so much of our individual liberties over time. That’s how dictators get started.”