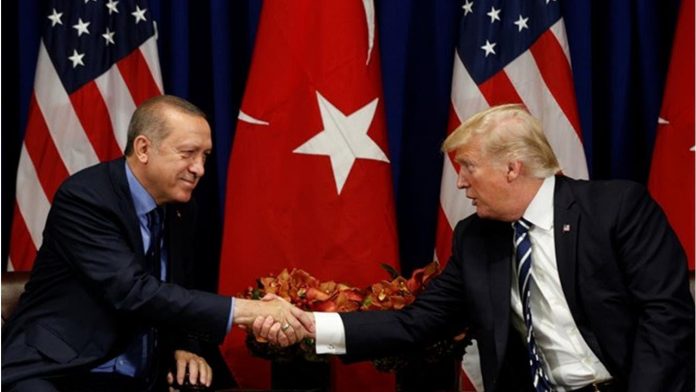 Two American Jewish activists expressed strong concern on Monday over US President Donald Trump’s declaration of faith in Turkish President Recep Tayyip Erdogan as part of his sudden decision to withdraw the 2,000 US troops presently assisting Kurdish and Arab allies in Syria.

“This most recent embrace of Turkey as a strategic partner in this ‘new’ US policy — relating to ISIS, Syria, the Kurds — should raise serious alarm bells in Israel and in the pro-Israel community,” Abraham Foxman, the national director emeritus of the Anti-Defamation League (ADL), told The Algemeiner on Monday.

Rabbi Abraham Cooper — associate dean of the Los Angeles-based Simon Wiesenthal Center — meanwhile asked whether anyone could “seriously believe that Erdogan will block the land corridor Iran is creating across Syria into Lebanon,” one of the more serious long-term issues in Israel’s northern security theater.

“It’s difficult to fathom what it was that Erdogan promised Trump, and that is part of the existential challenge facing Israel,” Cooper told The Algemeiner.

Trump’s confidence that Erdogan will “eradicate” what remains of ISIS marks another dramatic turnaround in the US president’s turbulent relations with foreign leaders. Just in August, amidst a dispute over an American pastor, Andrew Brunson, who was imprisoned in Turkey, Trump declared a steep rise in steel and aluminum import tariffs on Turkey, along with sanctions against Turkish officials. In response, Erdogan urged a mass boycott in Turkey of the US electronics products, including Apple’s iPhone.

More recently, Turkey accused Trump of adopting a “comic” stance toward the murder in October of the Saudi journalist Jamal Khashoggi at Saudi Arabia’s consulate in Istanbul. However, in a sign that Trump was changing his attitude toward Erdogan’s Islamist government, Turkish presidential spokesman Ibrahim Kalin claimed on Monday that the US president had agreed to pay an official visit to Turkey during 2019.

Both Foxman and Cooper were in agreement that Trump’s new alignment with Erdogan should be regarded with alarm by the American Jewish community, especially as the Turkish president’s frequent antisemitic outbursts are increasingly echoed by other senior Turkish officials — such as Foreign Minister Mesut Cavusoglu, who on Monday invoked the historic “blood libel” in slamming Israeli Prime Minister Benjamin Netanyahu as a “baby-killer.”

“This administration has frequently condemned antisemitic and harsh anti-Israel rhetoric from Washington or the UN — but sadly remains silent in face of the anti-Israel and antisemitic hatred spewed forth by Erdogan,” Foxman said.

In his most recent barb aimed at the Jewish state, Erdogan on Monday lambasted Netanyahu as “cruel,” adding that Israel had to “account” for “its crimes against humanity, massacres and destruction.”

Netanyahu responded by excoriating the Turkish strongman as an “antisemitic dictator whose army massacres women and children in Kurdish villages, inside and outside Turkey.”

Said Cooper: “Anyone who uses Jew-hatred as a cornerstone of his own political worldview is nothing short of a disaster for the Jewish people, not just for Israel.”

Trump’s “coziness” with Erdogan, Foxman remarked, “has been a continuing irritant to Israel and American Jewish and non-Jewish supporters of Israel.”

The cause of that distrust was rooted in Erdogan’s “harsh anti-Israel positions, his antisemitic rhetoric, his alliances with Israel’s enemies, antagonism to Israel’s friends, and his anti-democratic behavior,” Foxman asserted.

Cooper emphasized that Erdogan’s Islamist-inflected antisemitism was nevertheless not the only trend visible in the Muslim world. He cited both Azerbaijan — a close ally of Israel with a 96%-Muslim majority population — and the Kurdish nation in the Middle East as positive examples of an alternative path to Erdogan.

Cooper lauded the Kurds as an “absolutely fantastic people, and natural allies of the Jewish people.”

He continued, “If there is one nation that has a worse neighborhood than the Israelis, it’s the Kurds. They are in Iraq, Iran, Turkey and Syria — every conceivable flashpoint in the Middle East.”

Cooper argued that the predicament now facing the Kurds was “shameful, because if the Kurds were to be empowered to pursue their own national destiny, the Middle East would be a much more stable place.”

“Whatever machinations go on, the Kurds always seem to be at the bottom of the pile,” Cooper concluded. “And it’s an outrage.”