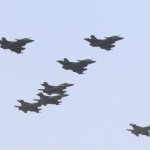 The French defense ministry announced Sunday that its air force is attacking the capital of ISIS in Raqqa, Syria. A command post and trainng camp were supposedly destroyed.

The attack comes hours after it was reported that the Paris terrorists communicated with ISIS command in Syria and that the men were trained, not merely inspired, by ISIS. Read more at BBC News.