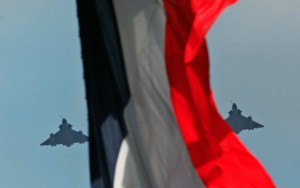 France launched a new round of air raids on the ISIS stronghold of Raqqa, Syria early Tuesday, the French defense ministry confirmed. The French military told the AFP Ten Rafale and Mirage 2000 fighters, in coordination with U.S forces, dropped a total 16 bombs and reportedly destroyed a command center and a training center.

The targets “were hit and destroyed simultaneously,” a statement from the ministry said. The raid “was aimed at sites identified during reconnaissance missions previously carried out by France.”

The latest round of strikes follows Sunday’s raids, in which a dozen ISIS targets were bombed by fighter jets launched from the United Arab Emirates and Jordan. Read more at the Guardian.