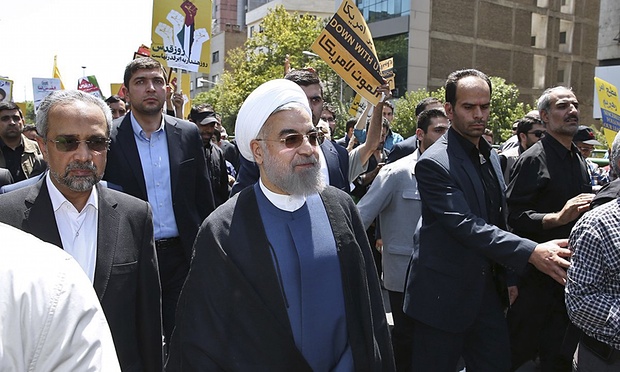 France is ready to impose further sanctions on Iran if no progress is made in talks over its ballistic missile program, the French foreign minister said on Friday.

Jean-Yves Le Drian, who this week reiterated support for a European-backed system to facilitate non-dollar trade with Iran and circumvent US sanctions, said France wanted to see Tehran rein in its missile activity.

“We are ready, if the talks don’t yield results, to apply sanctions firmly, and they know it,” Le Drian told reporters.

In response, Iran’s Foreign Ministry spokesman Bahram Qasemi “reiterated that any new sanctions by European countries would lead to a reevaluation by Iran of its interactions with those countries,” the state news agency IRNA reported.

“Iran’s missile capability is not negotiable, and this has been brought to the attention of the French side during the ongoing political dialogue between Iran and France,” Qasemi added.

A UN Security Council resolution enshrined Iran’s 2015 nuclear deal with Britain, China, France, Germany, Russia, and the United States in which Tehran curbed its uranium enrichment program in exchange for an end to international sanctions.

The resolution says Iran is “called upon” to refrain for up to eight years from work on ballistic missiles designed to deliver nuclear weapons. Iran denies its missiles are capable of carrying nuclear warheads.

Last May, US President Donald Trump pulled out of the nuclear deal, approved before he took office, and reimposed sanctions on Tehran, saying it was flawed as it did not address ballistic missiles or Iran’s support for armed proxies in Syria, Yemen, Lebanon, and Iraq.

The European signatories to the deal stuck with it, saying it is the best way to keep Iran’s nuclear work in check.

But US sanctions over dollar transactions have made investors wary about doing business with Iran, something the European-backed special purpose vehicle (SPV) is meant to tackle.

Diplomats previously told Reuters that new sanctions being considered by EU countries over the missile issue could include asset freezes and travel bans on Iran’s Revolutionary Guards and people involved in the ballistic missile program.