By Robert Steinbuch and Brett Tolman, The National Law Journal

Six amicus briefs have been filed in the U.S. Supreme Court in support of Kosher-meat-plant manager Sholom Rubashkin’s petition for writ of certiorari. Amici include an assembly of 86 former federal judges and Department of Justice officials in a brief authored by former Solicitor General Seth Waxman; the National Association of Criminal Defense Lawyers; the Washington Legal Foundation; the Association of Professional Responsibility Lawyers; a group of 40 legal ethics professors; and the Justice Fellowship. Signatories of Waxman’s brief include former FBI directors Louis Freeh and William Sessions, former attorneys general Edwin Meese and Dick Thornburgh, and former Solicitor General Kenneth Star.

The perhaps not-well-known details of the federal government’s case against Rubashkin are tragic and frightening: prosecutorial overcharging, a federal judge who inappropriately communicated in secret with government agents and attorneys, a prosecution that articulated a special bail rule only for Jews, a case that persisted after all of the initial claims were dismissed and a parallel state case that typifies improper piling on motivated by politics. With this background, we discuss an unemphasized consideration in the Rubashkin case that has broader implications for our criminal justice system: improper inertia in the criminal-justice system and the role of open-government laws in abating this dangerous force.

During his controversial and politically charged trial, Rubashkin had initiated Freedom of Information Act requests seeking documents from the federal government. Unsurprisingly, the government initially opposed the requests. Unfortunately, “no” is the government’s common knee-jerk reaction to FOIA inquiries. This failure to internalize the will of the people for transparent government remains the single biggest challenge to the efficacy of openness laws. The result in this case was that the government provided critical documents only after Rubashkin’s sentencing – directly affecting the defendant’s ability to pursue justice.

The disclosed, yet redacted, documents demonstrated that, between October 2007 and May 2008, the trial judge in Rubashkin’s case had extensively participated in meetings with government agents and prosecutors regarding both “planning” and “operational” phases of the government’s immigration raid on Rubashkin’s meat-packing plant – a raid that ultimately resulted in all immigration charges being dismissed federally and Rubashkin obtaining acquittals on every state child-labor charge.

The single biggest systemic problem with our judicial process is inertia. Prosecutors more often than they should uncritically defer to law enforcement’s decisions; trial judges – who are most typically former prosecutors – too frequently provide government attorneys a level of presumption not afforded defendants (notwithstanding the law’s stated preference for exactly the opposite); and appellate judges too regularly provide a level of deference to trial judges beyond that called for by standards of review. As a judge said to one of us, “Don’t get your sleeve caught in the criminal-justice system, because it’s really hard to get it out, regardless of guilt or innocence.”

So, when we see that some of very wrongdoing described above in the judicial process is only disclosed through freedom of information laws, we believe that such discovery should serve to both alert all concerned about injustice and unfairness and call for breaking the troubling inertia in our legal system.

The U.S. Court of Appeals for the Eighth Circuit, however, in denying Rubashkin’s appeal, which was based in part on these belatedly revealed injustices, stated that Rubashkin should have filed his motion earlier and that it was not convinced that the newly discovered evidence “probably will result in an acquittal upon retrial.” Blaming Rubashkin for the delay effectively caused by the government’s improper secrecy in violation of FOIA – and putting the heightened burden on the defendant to show his newly discovered evidence of wrongdoing would have resulted in an acquittal – challenges the very purpose of open-government laws and what unfortunately some have suggested are too lofty ideals for the justice system. Indeed, it’s reminiscent of the overused, but somewhat apt, narative of the child that seeks pity for his status as an orphan after having killed his parents – albeit the child in this analogy is somewhat counterintuitively the government, not Rubashkin.

Robert Steinbuch is a law professor at the University of Arkansas at Little Rock William H. Bowen School of Law. Brett Tolman, a former U.S. attorney for the District of Utah, is now in private practice in Utah at Ray Quinney & Nebeker. Tolman has signed the amicus brief submitted by former Solicitor General Seth Waxman, and Steinbuch is one of the 40 legal ethics professors who signed an amicus brief in the case. 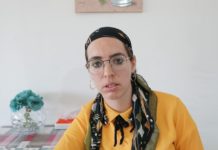 From Happy Newlywed, To Alone In The World