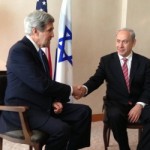 Leading French news channel Euro News distorted remarks made by US Secretary of State John Kerry about the recent series of Palestinian terrorist attacks in Israel on Wednesday, a media analyst pointed out.

However, a Reuters story on the same topic says Kerry’s reference to “acts of terrorism” was directed explicitly at the Palestinians. “Kerry on Tuesday described a wave of Palestinian knife and car-ramming attacks as ‘acts of terrorism’ that must be condemned as he held talks with Israeli and Palestinian leaders on how to end the violence,” the story reads.

“It is very clear to us that the terrorism, these acts of terrorism which have been taking place, deserve the condemnation that they are receiving,” Kerry told reporters during a joint press conference with Israeli Prime Minister Benjamin Netanyahu. “And today I express my complete condemnation for any act of terror that takes innocent lives and disrupts the day-to-day life of a nation.”

Gidon Shaviv, a researcher for the Committee for Accuracy in Middle East Reporting in America (CAMERA), juxtaposed the Euro News and Reuters headlines in a tweet:

Here you go, @euronews – this is what Kerry said. Lets compare it to your headline… pic.twitter.com/NWy20wFZRg

Meanwhile, the San Francisco Chronicle, reporting on a Palestinian knifing attack in the West Bank that left one Israeli soldier dead, also angered media critics for appearing to portray the Palestinian stabber as the victim.

The headline for the news brief ran, “Palestinians shot in assault,” and the first sentence said, “Israeli troops shot and killed a Palestinian attacker who stabbed an Israeli soldier to death Monday at a West Bank gas station.”

But in its next news brief, about girl suicide bombers in Nigeria and Camaroon, the Chronicle led with a round-up of the victims.