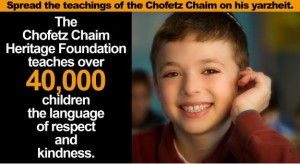 On the Chofetz Chaim’s Yahrtzeit, a Heaven’s-Eye View of the Power of Shmiras Haloshon

As the Chofetz Chaim’s yahrtzeit approaches, his teachings continue to resound throughout the world.  More and more people are learning and adhering to the mitzvah of Shmiras Haloshon and are, as a result, experiencing the shmira and life improvements that the mitzvah brings.

As the predominant organization devoted to spreading the Chofetz Chaim’s teachings for the past 28 years, the Chofetz Chaim Heritage Foundation receives a steady stream of feedback from people who benefit from its programs.  Whether they are reporting happier, healthier relationships, or outright miracles, they attest to the brocha that comes to those who use their power of speech with care and compassion. Here are some of their stories:

A woman had attended the CCHF World-Wide Tisha B’Av Event, where she was particularly moved by the presentation of Rabbi Dovid Ashear on the topic of vatranus (yielding to others). At 1:30 a.m. the rebbetzin received an irate text from an acquaintance. With Rabbi Ashear’s words in mind, she made the conscious decision to keep the peace with the other woman rather than taking offense.

Two hours later, her  husband, Reb Yehuda, awoke with discomfort in his chest. At first they didn’t think it was a heart attack, but as the symptoms persisted the couple decided that calling Hatzolah would be the wisest move. Since they were vacationing in Lakewood at the time they didn’t know the local Hatzolah number off hand. However, the woman quickly noticed that it was on the speed-dial of their host’s phone.

In what seemed like an instant, the ambulance arrived. With the use of a special piece of equipment which detects any blockage of the arteries the EMTsquickly realized that Reb Yehuda was in the midst of a massive heart attack.  As he began to lose consciousness, the same machine was used to shock his heart back into action.  He was then rushed to the hospital by a full crew of paramedics who worked to keep him alive, ultimately surviving what would have ordinarily  been a fatal attack.

His wife’s  ability to speed-dial Hatzolah, the speed with which the paramedics arrived, the presence of the expensive detection machine, and the outright miracle of the restarting of a heart that had reached a point at which resuscitation is normally impossible, had all played crucial roles in Reb Yehuda’s miraculous survival.

In fact, the miracle was even greater than they had realized at the time. The close proximity of both the ambulance and the  the life saving equipment were also the result of tremendous siyata d’Sh’maya. That day, one of the paramedics had received an emergency call from his son’s camp informing him that, due to an infection, his son’s blood pressure had dropped dangerously low. The boy’s life was in danger and to the camp was  sending him to a local hospital. After consulting with his son’s doctor, the father decided to take the Hatzolah ambulance to camp, pick up his son, and transport him to a world renowned Philadelphia hospital. The doctor recommended that he bring along a crew of paramedics, as well as the specialized heart machine, for the three-hour trip from the camp to the hospital.

After a number of nerve racking hours the mission had been completed. However, as the crew neared the end of their return trip to Lakewood  the driver inadvertently  missed the correct Lakewood exit, forcing him to instead get off at a later one, literally around the corner from the home where they and the medical equipment were so desperately needed to save Reb Yehuda’s life. It was right at that moment the call came in, enabling the crew to arrive at Reb Yehuda’s home with not a moment to spare.

There was no doubt in Reb Yehuda’s wife’s mind that her act of vatranus a mere two hours earlier had been rewarded.

A Cure for Bullying

The principal of a girl’s elementary school called the Chofetz Chaim Heritage Foundation to share the following story:  One of the school’s seventh grade classes was plagued by a incessant and very serious bullying problem. There were a number of girls had become intimidated and isolated, suffering terrible emotional trauma due to the hostile environment.

Using a number of different methods the teacher had tried to solve the problem. She tried speaking to the girls involved, talking to the class in general about achdus and Ahavas Yisrael, imposing penalties on the wrong-doers and giving advice to the victims on ways to defend themselves.Nothing seemed to help. In fact things just continued to deteriorate.

One day while speaking to a colleague, the teacher heard about the Chofetz Chaim Heritage Foundation’s seventh-grade Moshlei Haloshon program, which specifically addresses ona’as devarim and bullying. After receiving the curriculum  she immediately began inculcating the class with an understanding of the halachos of ona’as devarim ,its root causes and ways to put an end to this bad habit. Through daily exposure to these important ideas, and to stories and discussions that captivated the students, the class had a social revolution- achdus quickly became a class  project.

“The Moshlei Haloshon program completely changed the class,” the principal reported. “More importantly, it made school a welcoming place for ALL girls.”

In the Chofetz Chaim’s Merit

These and dozens of other programs are enabling the Chofetz Chaim Heritage Foundation to make the Chofetz Chaim’s teachings a reality in Klal Yisrael’s daily life. From the 40,000 school children who learn the “language of Ahavas Yisrael” in its school programs, to the tens of thousands who attend the Tisha B’Av Event each year, to the thousands more who learn from the daily learning seforim it has produced on ona’as devarim, shmiras haloshon and chessed, to the many visitors to its powerofspeech.com website, it has slowly but surely changed the landscape of the Jewish world