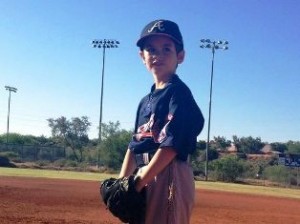 What happens when an umpire instructs a 9-year-old frum boy to remove his tzitzis? The following is an email that Rabbi Mendy Lipskier, Director of Chabad Lubavitch of Fountain Hills in Arizona, sent to his community:

I’d like to share a real life experience that occurred in our family recently. The “Kid and the Yid” is our son, Yossi, 9 years old, an avid baseball fan, and valuable team member on our local Little League team. We recently dropped him off, “uniformed up” at “the diamond” for the regular game.

We do as all little league parents normally do, sometimes we stay, sometimes we drop off. Due to other commitments, this particular day we dropped him off leaving him in his uniform with his coach and teammates.

What happened next was the “foul ball.”

The game was going fine, with Yossi (as always) very actively participating, and very much looking forward to his “at bat.” As he came up to bat, the umpire happened to notice that Yossi wears two uniforms, his team uniform, and also the fringe undergarment uniform of every male Jew – Tzitzit.

And then, for the first time, the umpire insisted that Yossi remove his Tzitzit in that it could produce some type of “interference or unfair advantage.”

Yossi –the only Jewish boy, not just on the team, but we think in the entire league– respectfully explained to the umpire that he is wearing a religious undergarment, had never had an issue with this previously, however the umpire would not listen, decrying in affect “foul ball.”

What was Yossi to do? Disrespect the umpire (an adult), or disrespect his religion?

To Yossi, the choice was easy and clear. He had “two feet on the ground” in more ways than one. He walked off the field and would not play!

But then another thing happened: The game stopped. Fellow members of Yossi’s team volunteered to walk off the field and forfeit the game in its entirety in support of him.

After a significant “pow-wow” between the coaches and the umpire, Yossi was allowed to play, “double uniforms” and all.

So what educational opportunity does this story lend itself to?

1. Tzitzit is a sign of Jewish pride. Jews have always had a way of dress to distinguish them from the people of the lands in which they lived-even when that meant exposing themselves to danger and bigotry. By the grace of G?d, today most of us live in lands where we are free to (and should) practice our religion without such fears.

2. Religious tolerance means to refrain from discriminating against others who follow a different religious path.

3. The freedom of individuals to believe in, practice, and promote their religion of choice without interference, harassment, or other repercussions shall always prevail.

4. Ignorance, unacceptance and religious intolerance still run rampant, and people exhibiting those traits, among other “blind acts,” might see Tzitzit as just part of a “fringe religion.” However, we actually see it as a symbol of “forget-me-knots.” Today, whether it be a Yamulke, a Mezuzah, or Tzitzit (ideally all), as Yossi did, we should all wear our “Jewish uniform” unapologetically with pride and with our head’s held high.

As we know, self-assertion often demands a lot of humility. Doing something out of the ordinary requires putting our image on the line. It means that I care more about my truth than what other people think about me. This is self-esteem that is rooted in soul-consciousness.