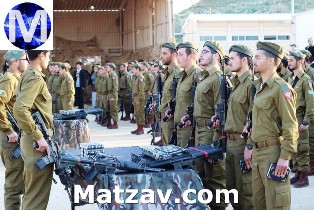 A religious IDF combat soldier was penalized after his formerly religious commanding officer denied him permission to grow a beard. The commander of his base in southern Israel intervened and his prison sentence was commuted to eighteen days’ confinement on base.

“My son had a beard since he enlisted in the IDF,” the soldier’s father said. “We’re not talking about a passing style or trend. His beard meets the criteria of the army but the army decided not to approve it and rejected his requests with false allegations.”

The issue of beards in the IDF comes up time and again. Shortly before Shavuos, MK Yaakov Margi of Shas was told by chareidi soldiers doing basic training at the Shachar Technological and Logistics Directorate Training Base at Tzerifin that they were not authorized to have beards. The IDF quickly resolved the issue before it hit the chareidi press.

“The problem with beards is due to a change in procedure,” Margi explained. “The authority to issue a [beard] permit was given to adjutants and not to a military rov as was normally done beforehand. Today, when a soldier presents a request form he gets an answer after fourteen days even if the process is expedited due to the many hands it must pass.

“Despite a commitment of the Defense Ministry to deal with the problems, I end up handling a number of beard related cases in the IDF,” Margi said. “Changing the regulations would quiet down the issue.”