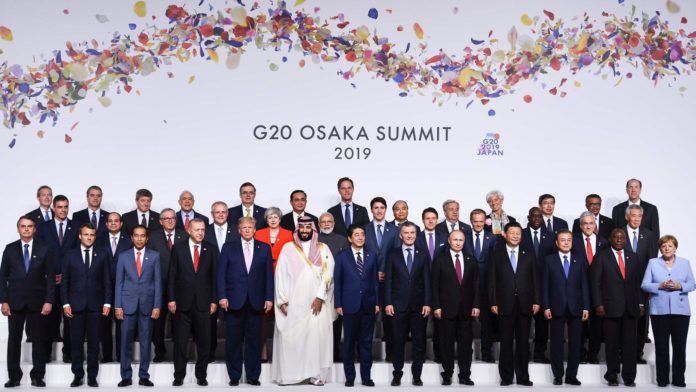 Leaders from the Group of 20 nations renewed their vow to take action to curb climate change Saturday, as United States once again stood apart and at odds with the rest of the world.

President Donald Trump – who at times appeared not to grasp the difference between global warming and air pollution – dismissed the worldwide push for climate action and denied that any aggressive response to curb the world’s greenhouse gas emissions was necessary.

“We have the cleanest water we have ever had. We have the cleanest air we’ve ever had, but I’m not willing to sacrifice the tremendous power of what we’ve built up over a long period of time and what I’ve enhanced and revived,” Trump told a news conference at the end of the two-day G-20 summit in Osaka, Japan.

The United States was the lone dissenting voice in the final communique, where 18 countries and the European Union underlined that the Paris climate change accord is irreversible, and reiterated their commitment to its full implementation.

The modest language adopted by G-20 leaders was greeted as dangerously complacent by some environmental groups. But it displayed a common voice on the urgency of tackling climate change.

The final statement hung in the balance until the final hours of the meeting, with Brazil, Turkey and Saudi Arabia all wavering, officials said.

The United States, as it has since Trump took power, reiterated its decision to withdraw from the Paris agreement “because it disadvantages American workers and taxpayers,” and boasted that it had reduced its energy-related emissions by 14% between 2005 and 2017.

“I’m not sure that I agree with certain countries with what they are doing. They are losing a lot of power. I am talking about the powering of a plant,” Trump continued.

French President Emmanuel Macron had threatened before the meeting not to sign the final communique unless there was a strong commitment to climate change action. But he said leaders had at least managed to prevent a backsliding on climate change, “clarifying Brazil’s position on climate change and biodiversity,” and preventing Turkey from withdrawing from the Paris agreement.

Macron said his “red line” had not been crossed.

Saudi Arabia, which takes over the presidency of the G-20 in November, has also questioned the science behind an authoritative IPCC report on global warming in discussions at the United Nations.

“While other leaders managed to hold the line on the Paris agreement, it’s unfortunate that they have to continually fight this rear-guard action against Trump denialism instead of devoting their energies to scaling up global action,” said Elliot Diringer, executive vice president of the Center for Climate and Energy Solutions.

“Trump is ignoring not only science but the growing demands of the U.S. public and U.S. companies for decisive action. As even the Chamber of Commerce recently declared, inaction is not an option.”

Paul Bledsoe, a lecturer at American University’s Center for Environmental Policy and a Clinton administration climate adviser, called the communique’s language touting its environmental record a “travesty” as the Trump administration was rolling back U.S. domestic laws and providing cover for countries like China to raise their greenhouse gas emissions.

“Climate should a headliner right up with trade, but instead is largely an afterthought,” he said, talking of the G-20 summit.

Japan’s Prime Minister Shinzio Abe has vowed firm leadership to tackle climate change in his role as host and president of the G-20, but in the end was forced to defend a relatively modest agreement – which did not even include one of the major culprits in the United States.

“Despite the differences, all countries including Japan, the United States, the countries in E.U. and developing countries share a common basic understanding that we are aiming to leave a better world to the next generation,” Abe said. “Also, it is important to actually produce outcomes.”