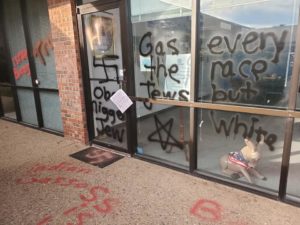 The main suspect behind antisemitic and racist vandalism carried out in Norman, Oklahoma overnight Tuesday is believed to have also painted hateful graffiti in neighboring Oklahoma City last week.

Kate Bierman, a Norman City Council member who is Jewish, uploaded photos of the graffiti to social media on Wednesday morning. Community volunteers quickly mobilized to remove much of it within hours, and organized a rally condemning hate that evening.

Police released surveillance video footage on Wednesday showing the woman suspected of painting the graffiti in Norman, as well as racist messages that were found outside the state Democratic Party and Chickasaw Nation buildings in Oklahoma City on March 28, among them, “gas the Jews,” “white planet only,” “welcome to Germany,” and the white supremacist symbol “1488.”

Oklahoma City and Norman Police said they are collaborating closely over the case.