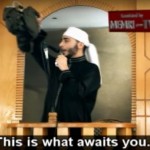 A Gaza preacher promised that the next terror attacks will include suicide missions that will “turn [Israelis] into lifeless corpses and scattered body parts.”

In a sermon on Friday posted by the Middle East Media Research Institute, the cleric identified as Abu Hamza Ashur praises the current wave of stabbing attacks against Israeli civilians and security forces and calls on Palestinians living in the West Bank to “shed their blood, pounce on them, dismember them, paralyze them, make the earth quake under their feet, trample on their heads.”

Waving what appears to be a suicide vest during the sermon, Ashur claims that the “next martyrdom operations will be carried out with explosive belts.”

“This is what awaits you. This is your nightmare,” he threatens. “We will use it to turn out into body parts, we will annihilate you with it, we will turn into lifeless corpses and scattered body parts.”

The time for demonstrations and rallies over. Only rage will liberate land,” he goes on.