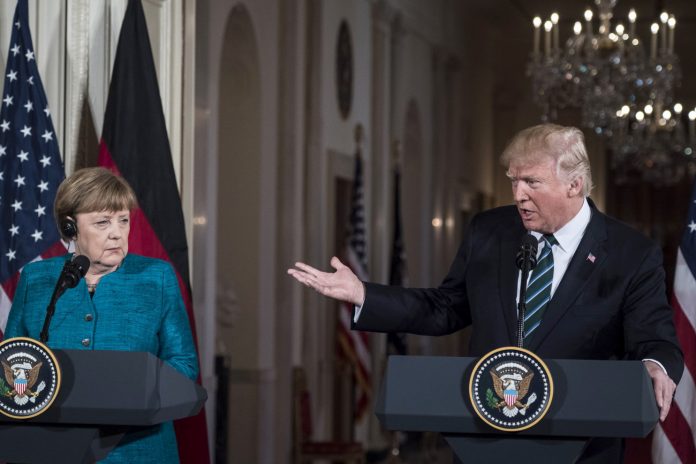 President Donald Trump’s tweet accusing Germany of owing the United States “vast sums of money” for NATO might have been an attempt to put pressure on the European ally. But Berlin has rejected his claim while also questioning his understanding of NATO finances.

“NATO does not have a debt account,” von der Leyen said, according to her ministry. In reality, NATO has only a small logistical budget, which relies on funding by all member states. The vast majority of NATO members’ total resources are managed domestically, however.

The criticism echoed other experts, including former U.S. ambassador to NATO Ivo Daalder. “Trump’s comments misrepresent the way NATO functions,” Daalder told The Washington Post on Saturday. “The president keeps saying that we need to be paid by the Europeans for the fact that we have troops in Europe or provide defense there. But that’s not how it works.”

Von der Leyen also indirectly criticized Trump’s plan to reduce funding for U.N. peacekeeping missions. German defense expenditure was not exclusively dedicated to NATO missions, she emphasized, and additional German funding would be used for U.N. peacekeeping missions, for instance. “What we want is a fair burden-sharing, and in order to achieve that we need a modern understanding of security,” von der Leyen said.

The rather unusual rebuke of Trump by a German defense minister indicates growing concerns in Berlin over trans-Atlantic relations. The percentage of Germans who view the United States as a trustworthy ally has dropped from 59 percent in November to 22 percent in February. In recent months, Sigmar Gabriel, Germany’s outspoken vice chancellor and foreign minister, has even called Trump a “threat.”

This is a shift in a nation that has long considered itself one of the United States’ closest allies, although at times an uncomfortable one. Germany’s foreign policy is still shaped by memories of World War II, and foreign military operations are deeply unpopular with German voters. Instead of boosting its defense spending, Germany has historically invested more in development aid and deepened its economic ties with other nations.

But Germany is also the largest European host nation for U.S. troops, home to about 30,000 American service members. Theoretically, Trump could threaten to withdraw some of those troops and move them elsewhere. But such a move would make little strategic sense for the United States, which relies on its military bases in Germany such as Ramstein for operations in Eastern Europe and the Middle East. Over the past decade, U.S. bases in Germany have mostly benefited America.

Trump’s tweets certainly won’t make it easier for Chancellor Angela Merkel to persuade a wary German public to increase military funding, even if the U.S. president does not escalate the dispute.

During her meeting with Trump on Friday, Merkel explicitly reaffirmed her commitment to nearly double Germany’s defense spending until 2024. But that plan still needs to be approved by her government and Parliament.

If passed, the increase would meet NATO’s requirement that member states spend 2 percent of GDP on defense by 2024, a goal set three years ago. Germany pays 1.2 percent; the United States kicks in more than 3 percent. Four other countries – Greece, Estonia, Poland and Britain – also meet their obligation, as my colleague Amanda Erickson explained Saturday.

Germany might find itself under more pressure to increase military funding if those four other nations decided to back Trump’s criticism.

“Nobody in Estonia wants to be left out in the cold because Germany doesn’t spend enough money on defense,” said Marcel Dirsus, a German security politics scholar, referring to fears of a Russian invasion in Estonia.