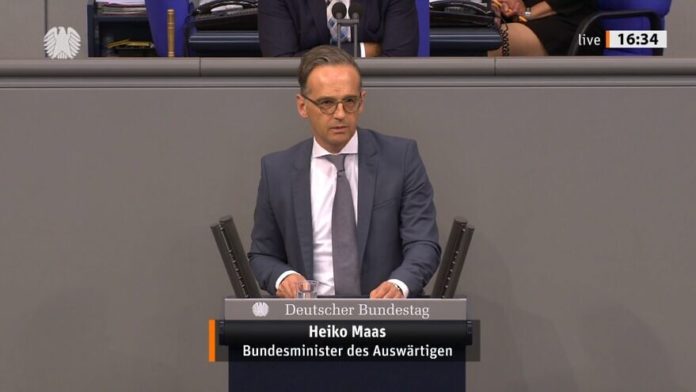 It was a rainy first of July in Berlin, and a protest was expected outside of the Reichstag, Germany’s historic house of parliament (Bundestag) with its famously post-war transparent dome above the parliament that tourists can alight for a view of the capital and of modern Germany’s democracy in action.

For the handful of protesters on the wet stone near the neo-Baroque edifice, it was a day of shame for Germany democracy. An hour later, the “grand coalition” consisting of the Christian Democratic Union/Christian Social Union (CDU/CSU) and the Social Democrats (SDP), along with the Free Democrats (FdP) from the opposition, would vote on a non-binding resolution to condemn Israel over plans to extend sovereignty over Israeli-controlled areas in the West Bank/Judea and Samaria, a moved often dubbed “annexation.” The debate was symbolically timed on the day from which Israel could execute the move (but hasn’t yet) and in which Germany assumed the presidency of the Council of the European Union.

The protest, which essentially turned into a one-man show, starred its initiator, Marcel Goldhammer, a journalist with both German and Israeli citizenship.

“Germany killed 6 million Jews in World War II, in the Holocaust, and now Germany wants to tell Israel how to defend its security,” Goldhammer told JNS, holding an Israeli flag which he proudly waved to passersby, at one point breaking out in Israel’s national anthem “Hatikvah.” He also slammed Germany’s alleged funding of NGOs that support or excuse Palestinian terrorism, saying, “Shame on you!”

The only political opposition came from the right-wing Alternative for Germany (AfD), which abstained from the motion largely on the grounds that Germany shouldn’t tell Israel what to do. The populist party, which has been embroiled in controversy over statements believed to minimize the Holocaust, is largely shunned by the mainstream German Jewish community.

One pro-Israeli activist, who asked to remain anonymous, came to the protest and then left when she noticed AfD affiliates; still, she expressed dismay at the lack of any organized Jewish-German opposition to what she considered a vote against Israel. The Central Council of Jews officially representing Germany Jewry and the Israeli embassy in Berlin declined to comment on the motion.

Goldhammer, who is politically independent, does not believe that the AfD is an anti-Semitic party but a legitimate opposition force.

In the name of ‘friendship’ …

At the plenary debate, all parties aside from the AfD expressed, in varying degrees, their opposition to annexation, in the name of upholding international law, the diplomatic process, regional stability, the “two-state solution”—and Germany’s friendship with Israel.

“Germany feels an obligation toward Israel, as part of our historical responsibility,” said the first speaker Foreign Minister Heiko Maas (SPD), who proudly noted that Israel was the first country he visited post-coronavirus lockdown, in part to stop Israel from executing U.S. President Donald Trump’s “Peace to Prosperity” Mideast peace plan on which sovereignty is predicated. He also lauded Germany’s continued financial contributions to the Yad Vashem Holocaust museum. “That also applies to the observance of international law, however. And if those two come into conflict, we must face up to that. Silence is not an option.”

Following the debate, the FdP told JNS that it nevertheless seeks to enforce new Israeli-Palestinian talks within the European Union.

“We will continue to use the special relationships and contacts to express our existing concerns and our urgent request to the Israeli government to refrain from annexing parts of the West Bank and from further expanding the settlements,” said FdP’s Benjamin Strasser.

AfD’s Dr. Anton Friesen doesn’t buy the “friendship” argument. “The invocation of Germany’s special relationship with Israel is an old rhetorical phrase. It is often used to justify an essentially anti-Israeli policy that is hidden behind it,” he told JNS.

Representing the AfD at the debate, Friesen said at the podium: “Now, we can stand off to one side, shouting, ‘bad, bad, bad!’—the kindergarten style of international affairs we have come to expect from Germany, the world power of hyper-moralizing—or we can accompany this process reasonably and rationally, giving new initiatives the chance they deserve, possibly as part of a Middle East Peace Conference, as the Alternative for Germany supports.”

For the Greens and Die Linke (“The Left”), the motion was too easy on Israel in part because it deemed sanctions against the Jewish state as “unproductive.”

Die Linke’s Dr. Gregor Gysi called for an arms embargo in the event of annexation and suggested Israel would bring upon itself violence and anti-Semitism. “Israel’s reputation will become much more negative worldwide if the annexation plans are implemented. This also affects Jews everywhere. Neither they nor Israel will be safer. On the contrary.”

Parliamentarians from the SPD, Die Linkie and the Greens were among the 1,080 lawmakers from 25 European countries to sign a letter expressing grave concern over annexation moves. The E.U.’s High Representative, Josep Borell, published similar statements.

A history of mixed signals

Despite numerous claims by politicians (including at the July 1 debate), particularly from German Chancellor Angela Merkel’s CDU/CSU, that Israel’s security is Germany’s “reason of state,” Israel’s voting records in the Bundestag have trended towards “Israeli-kritik” (a term often used to describe disproportionate criticism of Israel) since 2010. That’s the year when all parties condemned Israel for its interception of the Gaza Strip-bound Mavi Marmara flotilla.

In May 2019, the Bundestag passed a resolution that deemed the BDS movement an anti-Semitic endeavor to the applause of the Israeli government. In December 2019, it voted to ban Hezbollah. (Both motions came on the heels of AfD’s more strident, rejected versions against BDS and Hezbollah.) However, in March 2019, the ruling coalition voted against FdP’s motion to change Germany’s anti-Israeli voting patterns at the United Nations. In 2018 alone, Germany voted 16 out of 21 times for anti-Israel resolutions while abstaining from four, prompting the human-rights organization, the Simon Wiesenthal Center (SWC) to name Germany’s Ambassador to the United Nations, Christoph Heusgen, one of 2019’s top 10 list of worst anti-Semitic outbreaks.

“Other than mouthing ‘Never Again’ on Holocaust Memorial Day events, has there been any wall-to-wall consensus in the Bundestag to sanction the Ayatollah [Iranian Supreme Leader Ali Khameini] for his genocidal, Holocaust denying regime?” said Rabbi Abraham Cooper, associate dean and director of global social action at SWC. “How about a national consensus to actually combat growing anti-Semitic hate and extreme anti-Israel rhetoric from the far-right, far-left and Islamists beyond just tabulating the numbers?”

He said he would leave it to Israel to decide on annexation, but added “since Germany continues to fund UNWRA’s anti-peace curriculum, continues to send checks to corrupt pay-to-slay Palestinian Authority, continues to overwhelmingly vote against Israel during the Merkel Administration at the U.N., Germans will have to excuse us if we don’t embrace such blatant hypocrisy and double standards.”

Following the vote, some pro-Israel activists grew more vocal in their condemnation of the condemnation. “It is absolutely disgusting for the German Bundestag to have held this role,” said Sacha Stawski, president of the German-based Israel advocacy organization, Honestly Concerned. “If you listen to the speeches held by the different parties, there was not a single speech in my opinion, even from our supposed friends, that didn’t have some problems in it. Most of the [pro-Israel] NGOs are literally in a state of shock in many ways.”