While visits to Orthodox communities by NY state-wide candidates such as Cuomo, Paladino and Donavan have come and gone with a splash – a negative splash that is, Republican U.S. Senate hopeful Joe DioGuardi is busy – below the radar – garnering as much support AS possible.

way back to the petition process in mid-June and July, Mr. DioGuardi personally sought and received petitions from the Orthodox Community. During the primary season, the Republican twice visited the Orthodox areas in Rockland; popped into Kiryas Joel, Orange County; visited Yeshiva Ohr Hameir in Westchester; spent a few hours in the Borough Park section of Brooklyn on a Sunday afternoon, and was a guest in Manhattan at a dinner held by the Rabbinical Alliance.

During the primary period, Mr. DioGuardi granted four separate interviews for Jewish weekly papers: three in English (Yated, Jewish Press, and Hamodia), and one for a Yiddish weekly (News Report). These interviews were published back-to back during the final four weeks of the primary. Joe also ran some online ads to the Community, including here on Matzav. 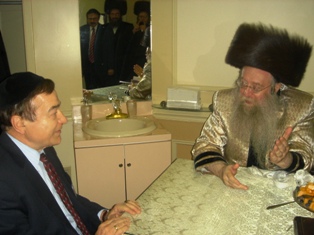 Unlike the standard “Happy New Year” ads published by campaigns, Mr. DioGuardi ran a minute-long “special new-year greeting” where he outlined why he is interested in the support of the Jewish community, and why he is the best option against Senator Gillibrand. Between others, the ad aired on The Zev Brenner Show.

A week after the primary, the candidate was again in Rockland County to thank voters, and he also met community leaders. Additionally, he ran thank you ads for the support he received in the community.

More recently, Mr. DioGuardi granted a 40-minute interview to Kol Mevaser, a powerful news line tool in the Chassidishe community, an informational and educational service to the many thousands Chassidim who don’t listen to the radio or have access to TV.

Just days ago, on Sunday, the candidate visited the Jewish community of Lawrence, NY. An invitation was published in the Five Town Jewish Times for the local community to attend the open event.

Yossi Gestetner, the Outreach and PR Designee to the Jewish community for Mr. DioGuardi, says, “It is fair to say that as of just days ago, Joe has given more time, energy, visits, and interviews to the Orthodox communities than many other state-wide candidates.”

Gestetner tells Matzav.com that some candidates are getting onto the bandwagon, “which is good for the community and the candidates alike.”

“But where I think Joe differs from others – besides being here for months now – is his direct appeal to voters,” says Gestetner. “Joe racked up support from some leaders, but his main approach is the voters: He addresses them and the issues in ads and in conversations with them.”