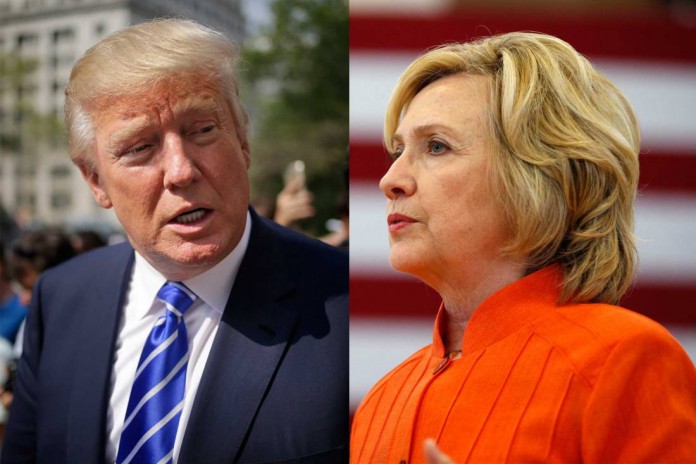 “TRUMP VS. CLINTON: SHOWDOWN OF CENTURY!”

Donald Trump’s sweeping Indiana victory on Tuesday night not only puts him on a glide path to the Republican nomination, but it sets up a general election fight between the real estate billionaire and former secretary of state Hillary Clinton that will be the nastiest, ugliest campaign in modern presidential history.

That’s not to say they are equally unpopular. Trump is more unpopular. In a mid-April Washington Post-ABC News poll just 31 percent of likely voters had a favorable view of him, while 67 percent saw him in an unfavorable light. An April NBC-Wall Street Journal poll showed less than one in four respondents (24 percent) regarded Trump positively, while 65 percent viewed him negatively.

As Philip Bump has noted, Trump’s numbers make him the least popular Republican presidential nominee in the past two decades (at least).

Clinton is less unpopular than Trump, but that’s not saying much. In a March Washington Post-ABC News poll, 46 percent of likely voters saw her in a favorable light, while 52 percent regarded her unfavorably. In the April NBC-Wall Street Journal poll, her numbers were far worse: 32 percent positive, 56 percent negative.

When you have two well-known and poorly regarded candidates running against each other, it means only one thing: It’s not about winning, it’s about making the other guy (or gal) lose. Neither Trump nor Clinton has much of a chance – given their unfavorable numbers – of convincing voters to make an affirmative choice for them. Instead, the best course of action will almost certainly be a prolonged attempt to tear down the other candidate, making him (or her) so unpalatable as to be disqualified.

Both Clinton and Trump offer a target-rich environment for that sort of race-to-the-bottom campaign.

She has spent the past 24 years in the national spotlight, accruing a series of controversies and confrontations that have already turned her into the Democrat who Republicans love to hate most. From her decision to use a private email server as secretary of state to her handling of the attacks in Benghazi, Libya; her reaction to her husband’s infidelity to her failed push for health-care reform; as well as Travelgate: There is lots and lots of material for Trump to use.

Then there is Trump. A “narcissist.” A “serial philander.” A “pathological liar.” And those are just the things that Ted Cruz called Trump on Tuesday. The multiple company bankruptcies. His comments about women. His plan to temporarily ban Muslims from entering the country. His willingness to treat the National Enquirer as a reputable news source. His favorable comments about Russian President Vladimir Putin. And on and on and on.

Finally, neither Trump nor Clinton are shrinking violets when it comes to throwing a punch. Trump proved over and over again during his march to the Republican presidential nomination that he will say and do just about anything to win. Marco Rubio was sweaty. Jeb Bush was low energy. Ted Cruz was a liar. Ben Carson had a problem similar to that of child molesters. John Kasich ate like a pig.

And, even as he was waging political war with the Republican field, Trump gave every indication that he was itching to bring his attack-at-all-times approach to Clinton, tweeting:

“Crooked Hillary Clinton, perhaps the most dishonest person to have ever run for the presidency, is also one of the all time great enablers!”

Clinton, for her part, has never shied away from dropping the hammer on her opponent. She showed during the protracted 2008 Democratic primary fight she was more than willing to savage then-Sen. Barack Obama as woefully inexperienced for the job he was seeking. In this campaign, Clinton came out aggressively against Bernie Sanders on guns and the pie-in-the-sky nature of some of his proposals, such as making college free for everyone. And, like Trump, Clinton has already signaled on Twitter that she is more than ready for the general election to start:

“We don’t have time to waste on Trump’s fake solutions that won’t do a thing to help your families.”

So, buckle up. This is going to be nasty, brutish and very, very long.