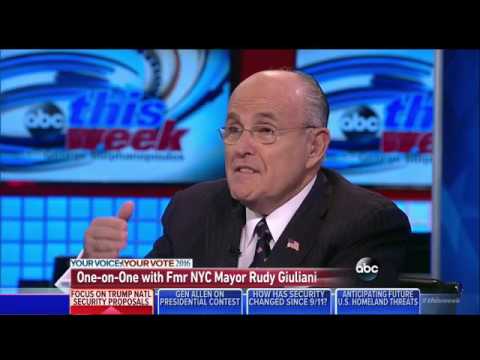 In an interview with ABC News’ “This Week” that aired Sunday morning, Giuliani defended Trump for saying last week that the United States should “take the oil” in Iraq as part of the “spoils of war” and to keep it out of the hands of the Islamic State militant group. It’s an idea that Trump has offered on the campaign trail numerous times over the past year, even as foreign policy experts question its legality and practicality.

Giuliani said Trump does not necessarily want the United States to extract the oil itself but wants to “leave a force back there and take it and make sure it’s distributed in a proper way.”

“That’s not legal, is it?” ABC’s George Stephanopoulos asked, as the Geneva Conventions forbid seizing the natural resources of a sovereign nation after invading it.

“Of course it’s legal. It’s a war,” Giuliani said, laughing. “Until the war is over, anything’s legal.”

Trump has called for a temporary ban on allowing most Muslims into the country, a proposal that many have deemed unconstitutional. He has called for the return of waterboarding and for killing relatives of terrorism suspects, both of which are forbidden under the Geneva Conventions.