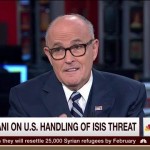 “I heard reports of such things in New Jersey [and] New York, [but] I didn’t see it,” Giuliani, who ran for president in 2008, said of the event’s aftermath.
“I recently saw a Washington Post article that goes back to then describing some kind of celebrations, but no, I didn’t see news reports at the time,” he added. “But I did get reports from the police.”

Giuliani then praised New Yorkers for not turning on the city’s Muslim population in the wake of the attack by radical Islamists.

“The reality is, the night of September 11, I said to the people of New York, ‘you should not assign blame here,’” he said. “‘Otherwise we’re going to be like them and I want us to be a model.’

“But I didn’t just rest on that,” Giuliani continued. “I took the police and made it part of the CompStat program and we tracked it for a month and we had no serious incidents either way.

“We had a couple of language things,” he added. “Thank God we didn’t have a serious incident.”

His remarks have since drawn skepticism from many media members and several of his rivals for the Republican nomination next year.

“We followed up on that report instantly, because of its implications,” said John J. Farmer Jr., according to The New York Times.

“Whatever the message, it is just plain wrong to cite thousands of Muslims dancing in Jersey City or Paterson on 9/11 as support,” Farmer added. “It never happened.”