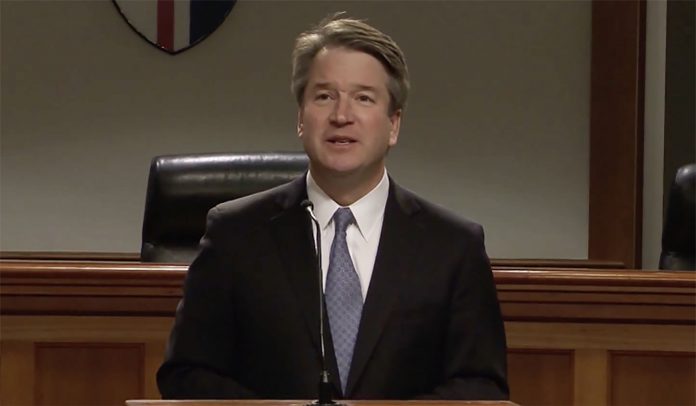 Senate Majority Whip John Cornyn (R-Tex.) said the Senate Judiciary Committee will vote on Brett Kavanaugh’s nomination as planned on Friday, with procedural votes on Saturday and Monday and a final confirmation vote on Tuesday.

Cornyn expressed confidence that Kavanaugh would be confirmed, despite the fact that several senators have not declared a position.

“We’re still talking through those issues and I’m optimistic we’ll get to confirmation,” Cornyn said.

Senate Majority Leader Mitch McConnell (R-Ky.) also said he was “very optimistic” as he boarded an elevator at the Capitol.

Questions had swirled earlier in the night about whether the Judiciary Committee would proceed with its scheduled vote.

Several of the senators who have not declared a position on Kavanaugh — Susan Collins (R-Maine), Jeff Flake (R-Ariz.), Joe Manchin III (D-W.Va.), Lisa Murkowski (R-Alaska) — held a brief meeting in a private office in the Capitol building after the hearing.

Asked by reporters if he believed Christine Ford, Flake said, “I’m not answering those kinds of questions.” “We’ll see,” he said When asked if he was ready to vote as part of the Judiciary Committee on Friday, he said, “We’ll see.”

Sens. Joe Donnelly (D-Ind.) and Heidi Heitkamp (D-N.D.), who supported previous Trump Supreme Court nominee Neil Gorsuch along with Manchin, have also not said how they will vote on Kavanaugh.

Exiting the meeting with Collins, Flake and Murkowski, Manchin said he didn’t know what the others would do.

“Nobody told me what decision they made,” he said. “Nobody has.”

Like President Trump, rank-and-file Republicans in the Senate reiterated their support for Kavanaugh after Thursday’s hearing, with several calling on leaders to hold swift votes.

“He’s going to be confirmed and he should be,” said Sen. Orrin G. Hatch (Utah), the chamber’s longest serving Republican.

Senate Majority Whip John Cornyn (R-Tex.) said he didn’t “see any reason why we wouldn’t proceed to the markup tomorrow and then go to the floor Saturday.”

“We did what we said we would do for Dr. Ford and gave her a fair opportunity to have her say. It still remains uncorroborated by all the people that were there,” he said.