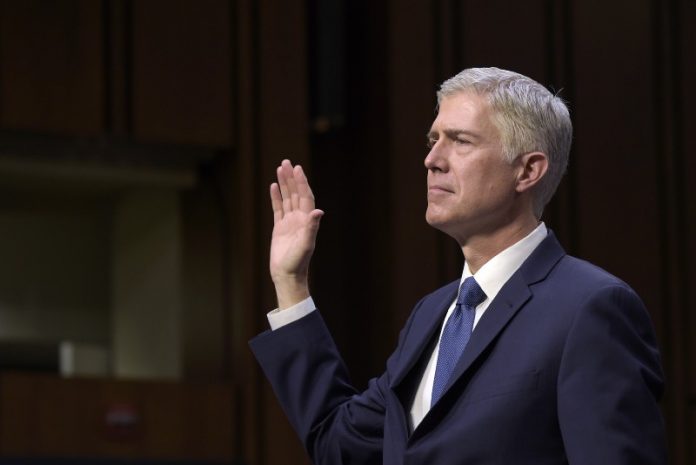 Judge Neil Gorsuch did not think much of the original line of attack that Democrats drew up to go after his nomination to the Supreme Court. He laughed at the very idea that he lacked the independence from President Trump to serve on the high court.

It’s been seven weeks since Trump announced the nomination of Gorsuch, 49, just days after the president had fired the acting attorney general, Sally Yates, for refusing to defend the first version of the controversial travel ban. Democrats had signaled that “judicial independence” would be the single most important prism through which they would view his nomination.

“That is the context in which I will review this nomination,” Sen. Richard J. Durbin (Ill.), a senior member of the Judiciary Committee, said in a statement immediately after Trump’s announcement.

Other Democrats issued similar decrees, daring the new nominee to break away from his presidential benefactor in his private one-on-one meetings with senators and in public hearings this week.

There was just one problem: Gorsuch, just as almost every judicial nominee does, was more than willing to swat away that critique. He was so eager, in fact, that he started answering before his microphone was turned on, prompting him to repeat his initial response to Grassley once the sound was properly set: “That’s a softball question.”

Democrats’ goal with court nomination: Make it a referendum on Trump

After more than 10 years on the U.S. Court of Appeals for the 10th Circuit, Gorsuch had long prepared how to respond to questions about judicial independence and how a judge should consider a decision outside of their personal political ideology.

“I go through it step by step and keeping an open mind through the entire process as best as I humanly can. And I leave all the other stuff at home and I make a decision based on the facts and the law. Those are some of the things judicial independence means to me,” he told Grassley.

At other times, under questioning from other senators, Gorsuch affirmed his belief “in the rule of law” and, on several occasions, that “no man is above the law.” He rejected predictions from a Republican lawmaker that he would be a reliably conservative vote on matters such as the travel ban from several Muslim majority nations.

What Democrats initially viewed as an opportunity to hit the nominee with gotcha questions instead allowed Gorsuch to appear even more reasonable than he would have otherwise. The smooth performance seemed even to impress Republican supporters.

“They gave me a gavel, not a rubber stamp,” Gorsuch said of his judicial philosophy.

The reality is that those are some of the easiest lines for any nominee to rehearse, and longtime watchers of the Judiciary Committee have seen this routine quite often.

In his 2005 confirmation hearing, Chief Justice John Roberts famously compared himself to an umpire in baseball who would not choose sides during the game. “My job is to call balls and strikes, and not to pitch or bat,” he said then.

Democrats may have realized in the run-up to the hearings that this line of attack would not work very well. In his second week of making rounds to visit senators, Gorsuch was confronted with questions about Trump’s attack on the judges who struck down the initial travel ban executive order.

In a private meeting, the nominee told Sen. Richard J. Blumenthal (D-Conn.), a Judiciary Committee member, that Trump’s comments were “disheartening” and “demoralizing,” Rather than dispute the senator’s characterization of Gorsuch’s comments, Trump’s top aides working on the nomination confirmed the account on the record – they were more than happy to publicly acknowledge his private rebuke of the president.

By last week Democrats started to signal that they were shifting their focus to a critique that Gorsuch’s rulings demonstrated a willingness to side with big corporations over average citizens.

Ultimately, only time can determine how independent a justice will be. A pair of renowned law professors released a “loyalty test” study in 2015, in which they found that justices tend to be more loyal to the president who nominates them and then become more independent thereafter.

White is an intriguing model. Nominated by President Kennedy in 1962, White eventually drifted into the conservative bloc of the court, opposing the Roe v. Wade decision that afforded rights to abortion and also some gay rights cases.

Democrats fear that Gorsuch is instead having what is known as a “confirmation conversion,” uttering the right words and phrases to win confirmation only to end up siding with the Trump administration’s most controversial positions.

Leahy tried to pin Gorsuch down on the travel ban and other potential rulings on Trump-related matters, but the nominee kept returning to the same type of lines that Yates, Roberts and many other nominees had uttered.

“Anyone, any law, is going to get a fair and square deal with me,” Gorsuch said.