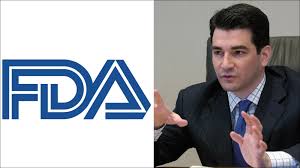 Scott Gottlieb, President Donald Trump’s choice to become the next commissioner of the Food and Drug Administration, was confirmed by the Senate this week. The vote was 57 to 42.

Gottlieb, a physician and venture capitalist with long ties to the pharmaceutical industry, served as a deputy FDA commissioner and a high-ranking official at the Centers for Medicare and Medicaid Services during the George W. Bush administration. He assumes the agency’s helm as it faces mounting pressure from Trump and other Republicans to further accelerate its drug-approval process and to take a more aggressive role in combating the nation’s opioid epidemic.

The Senate vote was largely along party lines. Majority Leader Mitch McConnell, R-Ky., lauded Gottlieb, saying he was committed to the development of groundbreaking treatments. And Sen. Lamar Alexander, R-Tenn., chairman of the health committee, said it was a plus that Gottlieb has had extensive experience with “the industry he will be in charge of.”

That didn’t assuage Sen. Patty Murray, D-Wash., who decried Gottlieb’s financial “entanglements” with health-care and pharmaceutical companies. Two other Democrats, Sens. Edward Markey of Massachusetts and Maggie Hassan of New Hampshire, criticized his past opposition to FDA risk evaluation and mitigation strategies; those are designed to reduce the perils posed by some products, including opioids.

The 44-year-old Gottlieb has been a prolific writer, often taking aim at the FDA. But some health experts said they don’t think his articles necessarily reflect what Gottlieb will do as the agency’s chief.

“I understand why people can look at things he has written and have a lot of concerns, but he’s going into a different role as FDA commissioner,” said Joshua Sharfstein, who was deputy commissioner during the Obama administration and is now a professor at the Bloomberg School of Public Health at Johns Hopkins University.

“When you have an opinion and express it, you aren’t responsible for the consequences,” Sharfstein added. “But as commissioner, you are responsible.”

Joseph Ross, an associate professor of medicine and public health at Yale University, noted that Gottlieb has sometimes faulted the FDA for being overly risk-averse in approving new medications. But “sometimes it’s OK to be risk averse,” said Ross, whose latest research showed that nearly one out of three FDA-approved drugs have a safety issue detected in subsequent years.

“If something comes to market quickly,” he said, “it’s important to do the work on the back end to see how drugs work in the real world.”

Ross applauded Gottlieb’s views on another topic – the need to improve the generic-drug approval process. If the incoming commissioner finds ways to get generic products to the market faster and provide more competition, “that will do good things, like bring prices down,” he said.