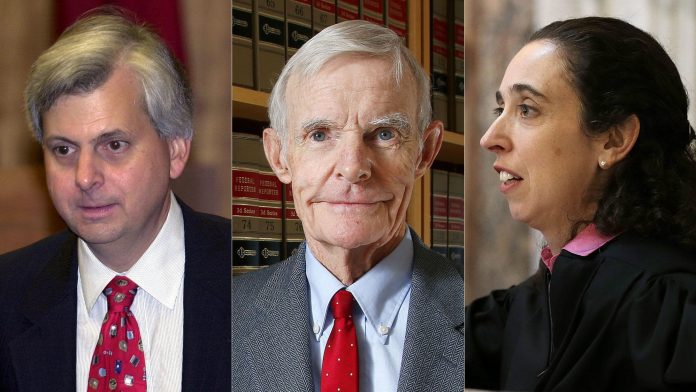 SAN FRANCISCO – A federal appeals court panel peppered a government lawyer with skeptical questions tonight about why it should – or should not – restore President Donald Trump’s executive order temporarily barring refugees and citizens of seven Muslim-majority countries from entering the United States.

Justice Department lawyer August Flentje argued that the order was “well within the president’s power as delegated to him by Congress,” and that the president had determined there was a “real risk” in not pausing travel to the U.S. from those countries. But the three-judge panel, at least during his presentation, seemed skeptical, asking about what evidence the government had to necessitate the far-reaching ban and what limits could be imposed on the president’s authority.

Washington Solicitor General Noah Purcell, who is arguing the case to keep the ban frozen, said the government was asking the appeals court to “abdicate” its role as a check on the executive branch and “throw the country back into chaos.” He, too, faced some critical questions.

“What’s the irreparable harm to the state of Washington?” Judge Richard Clifton asked.

The hearing before the three-judge panel at the U.S. Court of Appeals for the 9th Circuit is a critical one for Trump’s now-frozen immigration order. The judges will eventually determine whether the travel ban should remain on hold, or whether it should be immediately reinstated.

The court said in a news release that a ruling was “not expected to come down today, but probably this week.” The decision could potentially affect tens of thousands of travelers whose visas were revoked by the initial executive order, then restored after a federal district court judge put a nationwide stop to it.

The broad legal issue is whether Trump acted within his authority in blocking the entry of people from Iraq, Iran, Somalia, Sudan, Libya, Syria and Yemen, or whether his order essentially amounts to a discriminatory ban on Muslims. The judges must also weigh the harm the ban imposes, and whether it is proper for them to intervene in a national security matter on which the president is viewed as the ultimate authority.

Judge Michelle Taryn Friedland asked Flentje if the government had “pointed to any evidence connecting these countries with terrorism?” Judge Clifton noted that the government already had processes in place to screen people coming from those countries and asked, “Is there any reason for us to think that there’s a real risk or that circumstances have changed such that there’s a real risk?”

Whichever side loses is sure to take the fight to the Supreme Court. That traditionally has been solid ground for the chief executive. Justices often defer to the president on matters of immigration and national security, because of his constitutional powers and an additional grant of authority from Congress.

Trump said at a White House event Tuesday he was prepared to elevate the dispute as needed.

“We’re going to take it through the system,” Trump said to reporters. “It’s very important for the country . . . We’ll see what happens. We have a big court case. We’re well represented.”

The states of Washington and Minnesota, which are challenging the ban, argued in a filing Monday that reinstating the directive would “unleash chaos again” by “separating families, stranding our university students and faculty, and barring travel.”

Justice Department lawyers countered that noncitizens outside the United States have “no substantive right or basis for judicial review in the denial of a visa at all.” But they also offered a compromise: The lower court judge could have limited his ruling to “previously admitted aliens who are temporarily abroad now or who wish to travel and return to the United States in the future.”

Legal analysts have said the president has broad authority to set immigration policy and challengers of the ban might face an uphill battle. But the opposition has powerful allies, including nearly 100 big tech companies and more than 280 law professors across the country.

If those judges turn down the administration’s appeal and the matter moves immediately to the Supreme Court, the argument would be only on the temporary restraining order, and it would require five justices to reverse the lower court’s actions.

The high court faced a similar issue last term, when a Texas judge imposed a nationwide halt to an executive action from President Obama that would have shielded more than 4 million immigrants in the country illegally, but who met certain requirements to get work permits. The justices then split 4 to 4 on the matter.

If five justices could not agree, the case would return to U.S. District Judge James Robart to decide whether Trump’s order should be permanently enjoined. The fight up the legal ladder would then begin anew – possibly taking months, past when the travel ban is set to expire.

Homeland Security Secretary John Kelly predicted Tuesday that the administration would prevail in its bid to reinstate the executive order and said that judges might be considering the matter from an “academic,” rather than a national security, perspective.

“Of course, in their courtrooms, they’re protected by people like me,” he said.

Testifying before the House Homeland Security Committee, Kelly forcefully defended the measure as a necessary “pause” so officials could improve vetting procedures. He said that it is “entirely possible” that dangerous people are now entering the country with the order on hold – as Trump has said via Twitter – and that officials might not know about them until it is too late.

“Not until the boom,” he said when asked if he could provide evidence of a dangerous person coming into the country since the ban was suspended.

Kelly’s view does not reflect the consensus of the national security community. Ten high-ranking diplomatic and security officials – among them former secretaries of state John Kerry and Madeleine Albright, former CIA director Leon Panetta, former CIA and National Security Agency director Michael Hayden – said in a legal filing there was “no national security purpose” for a complete barring of people from the seven affected countries.

Kelly also acknowledged Tuesday that if he were given a second chance, he might do things differently in rolling out the order. That stands somewhat in contrast to Trump’s recent assertion to Fox News Channel’s Bill O’Reilly that the implementation was “very smooth,” and it is important because – if the appeals court reinstates the ban – Kelly might actually get another crack at implementation.

“In retrospect, I should have – this is all on me, by the way – I should have delayed it just a bit, so that I could talk to members of Congress, particularly the leadership of committees like this, to prepare them for what was coming, although I think most people would agree that this has been a topic of President Trump certainly during his campaign and during the transition process,” Kelly said.

Kelly later said, though, that most of the confusion that followed the signing of the order was attributable to court orders and occurred not among Customs and Border Protection officers, but protesters in airports. After people were initially detained and deported, demonstrators packed airports to voice their displeasure, and civil liberties and immigration lawyers filed lawsuits across the country.

Many of those suits remain ongoing, with lawyers keeping a close eye on the proceedings before the 9th Circuit. On Tuesday, a group of lawyers asked a federal judge in New York to force the government to turn over a list of those who had been detained or deported, as the court had previously ordered officials to do. The government has said no one is being detained and has debated what information it is required to provide.

“Noncompliance of a court order is very serious, especially where people’s lives are at stake,” said Lee Gelernt, Deputy Director of the ACLU’s Immigrants’ Rights Project. “We filed this motion to enforce because the government left us no choice.”