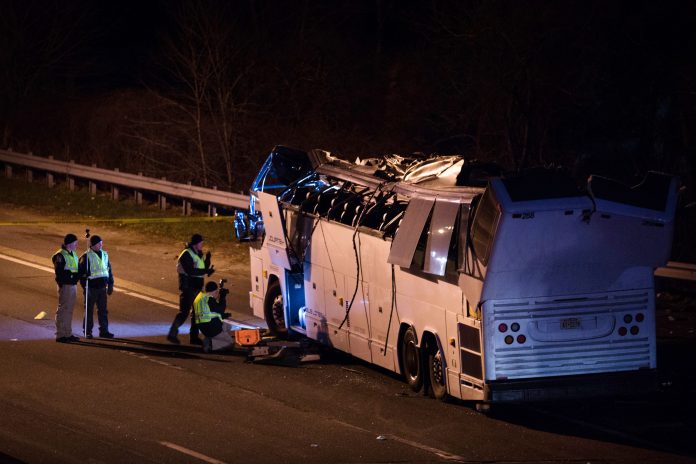 New York State Police are looking into whether a navigation device played a role in a bus slamming into a Long Island overpass, injuring dozens of students returning home Sunday night from a trip.

Investigators are examining the device the driver, Troy Gaston, 43 years old, was using when the roof of the charter bus was ripped off by an overpass on the Southern State Parkway, police said Monday. Tractor-trailers and buses aren’t allowed on the road, which has low overpasses.

A forensic analysis of the GPS device and passenger interviews are ongoing, police said.

Two high-school students remained in the hospital on Monday afternoon.

The vehicle, operated by Journey Bus Lines of Irvington, N.J., was traveling from John F. Kennedy International Airport in Queens when it hit an overpass in Hempstead, N.Y., at about 9 p.m.

Mr. Gaston had a valid driver’s license and didn’t have alcohol in his bloodstream, police said. A drug evaluation is pending. Mr. Gaston, who couldn’t immediately be reached, lives in Pennsylvania, police said.

According to a federal database, Journey Bus Lines has five buses and 16 drivers. The company has a satisfactory rating, with no crashes or injuries in the past 24 months. Read more at WSJ.