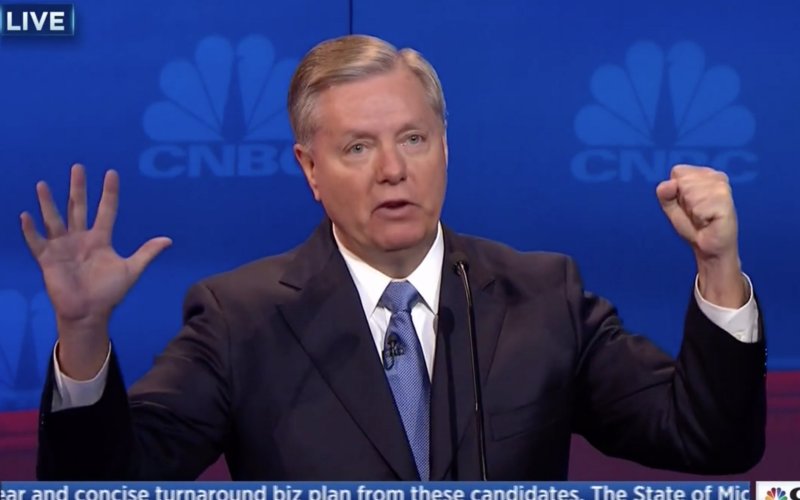 Sen. Lindsey Graham, R-S.C., on Sunday abruptly walked back his criticism of President Donald Trump’s decision to withdraw troops from Syria, a move that he had derided as “an Obama-like mistake.”

Graham, a onetime Trump critic who has since become one of the president’s most ardent supporters on Capitol Hill, made the remarks to reporters after lunch with Trump at the White House on Sunday afternoon.

“We had a great lunch,” Graham said. “We talked about Syria. He told me some things I didn’t know that made me feel a lot better about where we’re headed in Syria.”

He described Trump’s decision as “a pause situation” rather than a withdrawal, telling reporters, “I think the president’s taking this really seriously.”

Earlier this month, the White House announced that the United States will move quickly to withdraw its 2,000 troops from Syria, a decision that defied the warnings of Trump’s top advisers.

“We have defeated ISIS in Syria, my only reason for being there during the Trump Presidency,” Trump tweeted at the time, referring to the Islamic State militant group using an alternative acronym.

In the wake of the announcement, Graham issued a scathing statement in which he denounced the decision as “an Obama-like mistake made by the Trump Administration.”

“While American patience in confronting radical Islam may wane, the radical Islamists’ passion to kill Americans and our allies never wavers,” Graham said.

He went even further in a Senate floor speech, saying Trump’s decision went “against sound military advice,” and calling the president’s claim about the defeat of the Islamic State “fake news.”

“To those who say we have defeated ISIS in Syria, that is an inaccurate statement,” Graham said. He added that Americans would be less safe in the wake of a U.S. withdrawal from Syria and that he did not support efforts to “outsource our national security to any foreign power.”

Ahead of Sunday’s lunch, Graham told CNN that one goal of his meeting with Trump would be to try to persuade the president to reconsider his withdrawal decision.

“I’m going to ask him to sit down with his generals and reconsider how to do this,” Graham said. “Slow this down. Make sure that we get it right. Make sure ISIS never comes back. Don’t turn Syria over to the Iranians. That’s a nightmare for Israel.”

But after emerging from the White House, Graham appeared to have come around to Trump’s point of view, although he maintained that ISIS had yet to be defeated.

“He promised to destroy ISIS,” Graham said. “He’s going to keep that promise. We’re not there yet. But as I said today, we’re inside the 10-yard line, and the president understands the need to finish the job.”