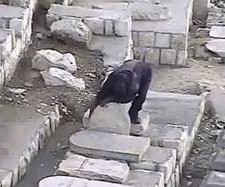 The ever-increasing number of stray dogs on Har Hazeisim has prompted the International Committee for Har Hazeisim (ICHH) to appeal to the Jerusalem Municipality to intervene. Jeff Daube, the co-chairman of the ICHH Israel Chapter has reached out to Councilman Don Ilouz (Hitorarut Party) to take action against the dogs who may pose a threat to mourners and visitors who come to Har Hazeisim. Mr. Ilouz informed Mr. Daube that he had reached out to the City Council and to Mayor Moshe Lion to tackle the stray dog problem.

Police sources say that several of the dogs died on the mountain from the heat but that there were few reports of visitors being attacked. The ICHH, however, asked the authorities to curb the dogs on the mountain, which is now relatively safe and attracts thousands of visitors. During the recent yahrzeit of the Ohr Hachaim, more than 150,000 visited Har Hazeisim without incident, thanks to a robust police presence and the efforts of the Council of Cemeteries.

In a statement, Avraham Lubinsky, co-chairmen of the ICHH, said: “After expending so much effort to secure the holy Har Hazeisim, the last thing we need is an invasion by dogs.” He added: “It is a desecration of those buried there to find a dog’s carcass atop a grave.” Mr. Lubinsky said that the Municipality has been extremely involved in cleaning up Har Hazeisim with regular sanitation services and that it should be able to deal with the stray dogs. He praised the Mayor for his commitment to secure and preserve Har Hazeisim.

Mr. Daube said that the ICHH-Israel Chapter would continue to monitor the situation and was hoping that the authorities could find away to end the incursions by the dogs. Councilman Ilouz said the he was in constant contact with the Municipality in solving the problem. He previously served in a legal capacity at the Foreign Ministry and worked with the Mayor of Yerushalayim, Nir Barkat. He is a graduate of McGill University Law School and Hebrew University’s Master program in public policy.

The ICHH, founded in May 2010, was instrumental in a major program of restoring security on Har Hazeisim that included the establishment of a police station, the stationing of a unit of the border police, the installation of a network of 176 surveillance cameras, repair of the infrastructure, restoration of destroyed graves, gating around the perimeter of the cemetery and much more. In the last Knesset, the Caucus on Har Hazeisim with 70 members from all political parties was the largest since the Knesset was founded.