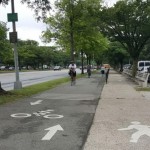 Brooklyn, NY – Thanks to Councilman David G. Greenfield’s funding, the NYC Department of Transportation (DOT) finished paving the most dangerous roads of Borough Park and Midwood last week. Greenfield ensured that this important work was scheduled for the summer months when schools are closed and many people are away in the Catskills and on vacation. This way, paving causes the least possible inconvenience for drivers. The streets are now smooth and accessible for commuters in the fall.

“Smooth roads are a critical quality of life issue. That’s why I secured extra money in the New York City budget to ensure that roads in our community are fixed. My many thanks to the Department of Transportation for taking my priorities into consideration and fixing the streets in the summer instead of the rest of the year,” said Councilman Greenfield.

“Thank you to Councilman Greenfield for securing extra funding for street repavement in Borough Park and Flatbush and thanks to the Department of Transportation for attending to these streets so quickly,” said Yidel Perlstein, Chairman of Community Board 12.

“More streets were repaved in Borough Park and Flatbush this summer than any other community in New York,” said Greenfield. Greenfield places a priority on advocating for drivers in Brooklyn. That’s why Greenfield has passed a law that grants drivers a 5 minute grace period at muni-meters. Also making life easier for drivers, Councilman Greenfield’s muni-meter legislation, which allows drivers to pre-pay muni-meters one hour before the meter regulations and shuts down meters when the rules are not in effect or the meter is out of paper. Moreover, Greenfield passed the law that stops the Department of Sanitation from placing an impossible-to-remove neon sticker on cars that do not move on alternate-side parking days.

The full list of streets that were repaved in Councilman Greenfield’s district is below:

East 18th Street between Avenue I and Avenue O