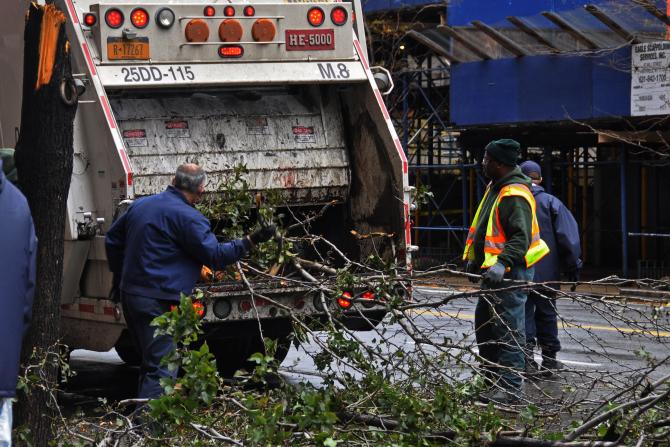 “This is a problem I have been working to solve for years. Today’s historic announcement will improve the situation and reduce traffic congestion for the residents of Borough Park. This would not have happened without the Mayor’s personal intervention. I’m very grateful to him for this.”

Greenfield has been working to address problems surrounding traffic caused by garbage collection ever since he was first elected in 2010, when he met with DSNY’s then-commissioner John Doherty to discuss the problem. In 2013, Greenfield called on the Sanitation Department to adjust its collection schedule to avoid having sanitation trucks on the road at the same time as school buses are picking up children. The overlapping schedules caused traffic headaches for residents who were heading to work in the morning.

“Anyone who drives through Borough Park in the morning is familiar with the sinking feeling that comes from being stuck in a long line of cars behind garbage trucks and school buses,” Greenfield said. “While I am grateful for the important service these workers provide to the community, I knew that there must be a better way to accommodate everyone who uses our congested streets during rush hour. That’s why I have remained so focused on solving this problem for as long as I have been in office.”

Since his election, Greenfield has actively worked with local community boards and with the Sanitation Department. After Doherty left the Sanitation Department in 2014, Greenfield immediately met with his replacement, Kathryn Garcia, to explain the issue. Following that meeting, Garcia made it clear that DSNY took the issue seriously, and pledged to look into possible solutions. “Traffic is the biggest quality of life issue we face in Borough Park,” said Yidel Perlstein, chairman of Community Board 12. “I want to thank Councilman Greenfield for his tireless work toward finding a solution for the residents of this community.” Barry Spitzer, district manager for Community Board 12, agreed. “Almost on a daily basis our office gets complaints about this issue. Traffic has been a regular headache for residents of Borough Park,” he said. “This deal will go a long way toward mitigating that issue.”

“Today’s announcement is the culmination of six years of work,” Greenfield said. “It would not have been possible without the hard work of the Sanitation Department, the community boards in my district, and the Mayor and his staff. I thank all of them for their willingness to come to the table and work together in finding a solution to this problem.”

Greenfield also thanked Senator Simcha Felder and Assemblyman Dov Hikind for supporting his efforts to remove the garbage trucks from Boro Park in the morning.