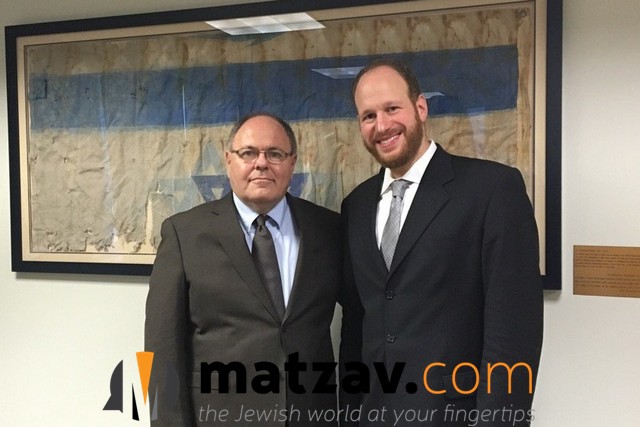 “Dani Dayan is an excellent choice to serve as Israel’s representative in New York, which has the largest Jewish community in the world outside of Israel itself,” Greenfield said. “His appointment signals Israel’s diverse leadership and commitment to its democratic principles.”

In a meeting with the new Consul General, Greenfield congratulated Dayan on the posting and encouraged him to reach out to all elements of New York’s Jewish community. “Ambassador Dayan has a long history of garnering support from all sides of the Israeli political spectrum. The Ambassador brought that spirit of inclusion with him to his new role in New York,” Greenfield said.

As Israel’s Consul General in New York, Dani Dayan represents the state of Israel to communities throughout New York, New Jersey, Pennsylvania, Ohio and Delaware. His nomination to the post by Prime Minister Benjamin Netanyahu was welcomed by the Israeli opposition as well. Dayan has a long history as a passionate advocate for Israel, both in the public and the private sector.

“I am delighted to welcome Ambassador Dayan to New York and I look forward to working with him to continue to strengthen the bond between the residents of Israel and the residents of New York City,” Greenfield said.

Ambassador Dayan will be a featured guest on Councilman Greenfield’s weekly radio show this Thursday, August 25th, at 7 p.m. on AM 620 radio (WSNR).