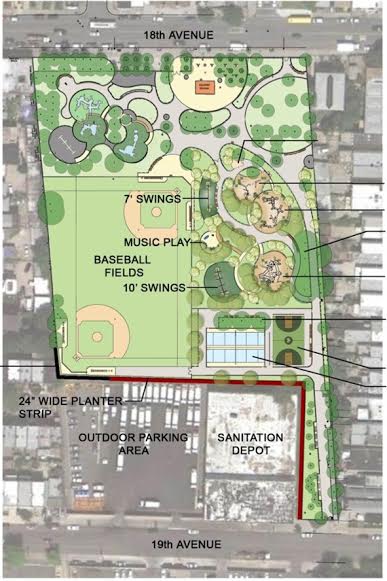 Councilman David G. Greenfield’s improvements to the 18th Avenue Park in Brooklyn will be completed this Fall, likely shortly before Sukkos in October, Greenfield announced this week. Although the project was initially scheduled for completion by December 2016, Greenfield advocated for a faster timeline because he felt that it was important for work to be finished while the weather would still permit area residents to take advantage of the new amenities. Thanks to the cooperation and hard work of the Parks Department, that goal will be met.

The park is currently undergoing $7.25 million in renovations. When the work is completed this Fall, area residents will enjoy four brand new playgrounds, two new baseball fields, and brand new basketball and handball courts. Additional swing sets are also being constructed, and the renovated park will feature additional paths, landscaping, and seating areas.

“I used to play in this park when I was a kid, and unfortunately parts of it haven’t seen any significant renovations since then,” Greenfield said. “When I got elected, fixing the 18th Avenue Park was my first priority. After so many years of hard work, I’m thrilled that we are finally seeing a light at the end of the tunnel. This is going to be the nicest park in southern Brooklyn.”

In addition to the 18th Avenue Park, Greenfield is in the process of renovating every single park in his district. He has secured $35 million for new and improved parks, including Borough Park’s first new park in years, which is located at the P.S. 192 schoolyard. Slated for future renovations are Seth Low Park, Kolbert Park, Di Gillio Playground and Friends Field.

“Parks are not a luxury, they are a necessity,” Greenfield said. “That’s why I fought so hard to bring this funding back to our community.”