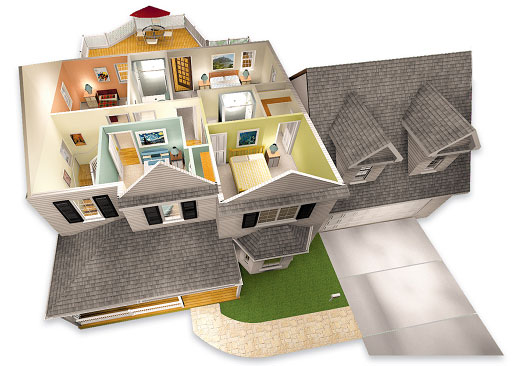 The way we design and build our houses could have a surprising impact on a tiny, but important, aspect of our personal lives: the microscopic organisms that share those homes with us.

A groundbreaking study published Friday in the journal Science Advances finds that certain aspects of a house’s design could have an influence on the types of microbes found inside, with more urban homes separating humans from the outdoors and keeping out the environmental microbes. And, the researchers speculate, these changes could be having an impact on public health.

“We humans build the environments we live in and spend most of our time [in], and these may be very different to the natural environments,” said Maria Gloria Dominguez-Bello, a professor at New York University’s School of Medicine and the new paper’s senior author, during a Thursday press briefing. “Very little is known about microbes of the built environment.”

Figuring out how building design may affect microbial communities is important because of the ways exposure to these organisms may affect human health and development, the researchers suggested.

“There is increasing evidence that exposure to microbial biodiversity from the natural environment is important for health,” said Graham Rook, a professor of medical microbiology at the University College London (who was not involved in this study) in an email to The Washington Post. Exposure to the microorganisms in our mothers’ bodies (which eventually populate our own) and exposure to microbes in the natural environment are thought to be important for healthy development, he said.

For their investigation, the new study’s authors focused on four communities in the Amazon Basin, all of which are located in areas with similar climates and outside environments. The differences between them had to do with their degree of urbanization.

At one end of the spectrum was the remote jungle village of Checherta, Peru, featuring open-air one-room huts made of natural materials. Next, there was the small rural community of Puerto Almendras, Peru, which contains homes with exterior walls but no interior divisions. Third was the Peruvian town of Iquitos, whose homes generally have external walls and interior room divisions, although the interior walls don’t always stretch all the way to the ceiling. And at the far end of the spectrum was the city of Manaus in Brazil, the largest city in the Amazon Basin, featuring contemporary home design with exterior walls made of synthetic materials and clear room divisions.

“As we move from rural to urban. . . houses become more isolated from the outside environment and also become more internally compartmentalized according to the function of the spaces,” said coauthor Humberto Cavallin, a professor at the University of Puerto Rico’s School of Architecture, at the press briefing.

In each community, the researchers swabbed both the floors and the walls in each room of the houses and then examined the swabs to see what kinds of microbes were present. They found that urbanization had a clear impact on the microbial communities inside the houses.

“The results of the study reveal that microbes from house walls and floors differ across habitations,” said lead author Jean Ruiz-Calderon, a biologist at the University of Puerto Rico. “With increasing urbanization, houses contain a higher proportion of human-associated bacteria. . . and decreasing proportions of environmental bacteria.”

In Checherta and Puerto Almendras there was a greater proportion of environmental bacteria, including soil bacteria such as Mesorhizobium, inside the homes than in Iquitos and Manaus. On the other hand, the urban homes had richer communities of human-associated microbes, such as Streptococcus and other bacteria usually found inside human mouths.

“The findings confirm, and extend, the findings of other studies,” said Rook, the University College London professor, in his email. “Increasing urbanization and modern high-income lifestyles result in loss from our homes of microbes from the natural environment.”

The walls of urban homes were particularly telling, the researchers noted. While microbial communities found on the floors tended to be fairly similar from one room to the next, wall microbes tended to be specific to the rooms in which they were found. For instance, bathrooms tended to contain a higher proportion of bacteria associated with the human mouth. The researchers noted that in highly urbanized homes, it was even possible to predict what room a sample came from just by examining its microbes.

“This indicates that walls become reservoirs of bacteria that come from different sources depending on the use of the spaces,” Ruiz-Calderon said.

The study focused only on a few communities in one part of the world, so the authors are careful to note that the results can’t necessarily be generalized. Other similar studies would have to be conducted in other places to definitively say this is a pattern that exists around the world. However, they do point out the importance of continued research into the potential health implications of urban design.

Research has suggested that exposure to microbes found in the natural environment is important for health, including for the healthy immune development of infants. Several scientific hypotheses suggest that changes in human lifestyles, many of them associated with increasing urbanization, have limited our exposure to many of the microorganisms we originally co-evolved with, and that the “disappearing microbiota” may have negative implications for human health.

The researchers also suggest that higher degrees of human-associated microbes in urban homes might be a sign that urban design could be making it easier for humans to pass pathogens between one another.

“We are in environments that are highly humanized, and therefore a lack of ventilation and high concentrations of human bacteria may. . . facilitate human-to-human transmission of microbes,” Dominguez-Bello said. In other words, if a person is sick in the type of home where human-associated bacteria tend to congregate in higher numbers, it may be easier for that person to pass on the offending bacteria to other members of the household.

For now, though, these ideas are just speculation. In this study, the researchers did not actually evaluate the transmission of pathogens or any other aspect of human health in the communities they examined. It’s an area of future research they hope to look into, Dominguez-Bello said.

But the results do underscore the ways that modern living is changing human interactions with the natural environment and caution that these changes may be affecting us in ways we don’t yet understand.

“As we alter our built environments in ways that diverge from the natural exposures we evolve with, we need to be aware of the possible consequences,” Ruiz-Calderon said.