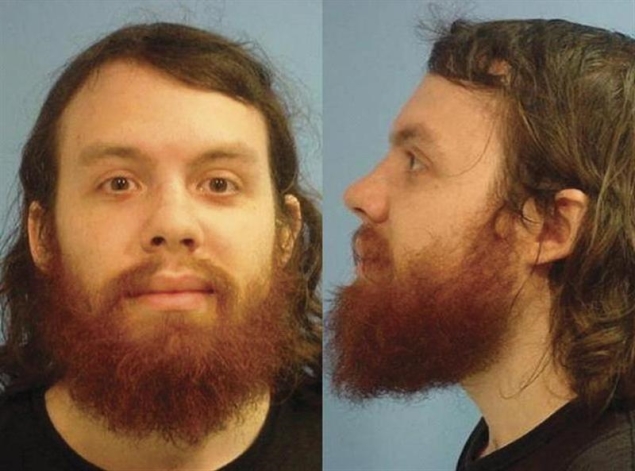 A notorious white supremacist computer hacker has claimed responsibility for sending anti-Semitic fliers to networked printers at several universities across the country, a coordinated cyber attack that included the University of Maryland and Princeton among thousands of targets.

Academic departments and administrative offices at schools in California, Illinois, Massachusetts, Maryland and New Jersey reported receiving the one-page fliers, which included two swastikas, assailed Jews for “mass immigration and degeneracy” and urged the “white man” to join “in the struggle for global white supremacy.” They included a link to the website of the Daily Stormer, a neo-Nazi, white supremacist group.

The Anti-Defamation League said in a posting on its website that “colleges around the country, large and small, public and private, continue to receive anti-Semitic fliers blaming Jews for destroying the country.” Oren Segal, director of the Center on Extremism with the ADL, said the scope of the attack was surprising.

“We got a lot of complaints from people who are concerned,” Segal said. “When you see the imagery of swastikas and anti-Semitism in your workplace . . . and don’t know where it comes from, it shocked a lot of people and confused people.”

Andrew Auernheimer, 30, a self-proclaimed Internet troll and white supremacist, told The Washington Post that he carried out the attack from his home in Abkhazia, a breakaway region of Georgia, as part of a new effort to distribute his message. He said he was able to print the fliers to at least 20,000 printers across the U.S., exploiting vulnerable devices with Internet addresses that are publicly available online.

“The primary motivation of everything I do is the salvation of the white race and preserving our people and securing an existence for white children,” Auernheimer told the Post via Skype, adding that he has plans to similarly exploit other networked devices. “Anything that outputs something. Audio and video devices would be nice, voice over internet protocol, phones.”

Students and administrators at several schools reacted strongly to the fliers, with the universities condemning the message.

“Princeton regards any actions making the atmosphere intimidating, threatening or hostile to individuals as serious offenses,” Michele Minter, Princeton’s vice provost for institutional equity and inclusion, said in a statement.

Maya Wahrman, a Princeton senior, said she feels fortunate that such anti-Semitic attacks are not commonplace and that the university appears to be taking the issue seriously.

“It’s still scary to think that this is possible in our world, that someone would care so much about hating Jews to hack an elaborate printer system across the country,” Wahrman said. “It reminds me how vulnerable any minority group’s place can be based on shifting politics and populism.”

Dwight K. Hamilton, the vice president for inclusion, diversity and equity at Smith, wrote to the college that “this document and its contents have no place in our community. We reject its hateful message as well as its intention to shock and intimidate. Our work to create an inclusive Smith community, where each member is safe, valued, and respected, will not be derailed by this cowardly act nor the hateful mindset that drove it. We are not intimidated; we are emboldened in our resolve.”

The fliers appeared anonymously on university printers — and other open-source printers — a way of instantly distributing the hate-filled missives remotely by computer. Officials at Princeton University said they believe someone was able to learn the unique Internet addresses of university printers and sent the document in a coordinated attack; any networked printer is potentially vulnerable to such an effort if a computer user is able to hack into the network or learn their specific addresses.

Investigators are trying to officially identify the source of the message, and have contacted the FBI for assistance, according to Min Pullan, a Princeton spokeswoman. Pullan said the university is confident that the attack was the work of a group outside of the university, and the school is working to block any further messages. She did not know how many fliers had been printed.

Andrew Anglin, the publisher of Daily Stormer, told the Daily Princetonian on Friday that the fliers came from Auernheimer. Anglin told The Washington Post that Auernheimer — known by the alias “weev” online — “did this monumental deed.” Anglin called the hacker “a true hero” whom he supports in “all his heroic endeavors.”

“It’s the first time anyone has ever done this in history,” Anglin said in a telephone interview. “He invented this.”

Auernheimer is a contributor to the Daily Stormer; in 2013 he was sentenced to 41 months in prison for breaching AT&T servers but was released in April 2014, after a federal appeals court reversed his conviction.

In an article published Friday evening titled “A brief experiment in printing,” Auernheimer boasted of his attack, which he called “mass printer trolling.” He describes how, while chatting in the Daily Stormer online chatroom, he first hit upon the idea of exploiting vulnerable printers in an attack akin to spamming e-mail accounts, but with actual paper documents.

“In our chat I asked aloud a simple question: how many printers are there on the open Internet?” he wrote. “It turned out to be upwards of a million devices. That’s a lot of things to print to. The sheer volume of paper one can generate with a single command is impressive.”

Auernheimer’s fliers went to the University of Maryland, University of Massachusetts Amherst, University of California Berkeley, DePaul University, Smith College, Mt. Holyoke College, Northeastern and Princeton, among others. Auernheimer said that he found open printers on the Internet, and was not trying to reach universities specifically.

A Northeastern spokesman confirmed that the fliers were sent to several university campuses last week and said that security experts determined they came from overseas; the school has put in a firewall to block further attacks.

The flier incident may have sparked copycats. University of Massachusetts Amherst spokesman Ed Blaguszewski said that a second flier was sent on Sunday to university offices via networked faxes and printers, and the school plans to ask for help from law enforcement officials to determine the source.

“The university condemns such cowardly and hateful acts,” Blaguszewski said in a statement. “Information Technology officials at UMass say they have placed additional blocks on external connections and access to the campus computing network.”

Anglin, in praise of the attack, said that one of its most important aspects was “invading the safe spaces that these universities provide for effeminate men and feminists and minorities.” Anglin also criticized the universities, which he said “are institutions created by white people for our progeny,” for advancing “an ideology of minority victimhood.”

Segal, at the Anti-Defamation League, said the fliers are a reminder that such attacks can come from far outside a community and still create fear.

“You can be literally halfway around the world and through networks be able to have that impact, reach people with their hate,” Segal said, noting that the world is more interconnected than ever, allowing people to move information at lightning speed. “That same technology allows haters to send their messages in the same way. . . . We need to start figuring out ways to mitigate this.”

Anglin also attacked the nation’s universities for their approach to what he sees as a free speech issue: “There is no threat of violence here and yet they are presenting it as a form of violence that someone has a different opinion.”

Some students also have pointed out what they believe is a double standard at Princeton in terms of responding to speech that some consider discriminatory and inflammatory, arguing that the university had a weaker response to incidents involving black students.

Last spring, a group called Urban Congo, a now-defunct student organization made up predominantly of white males, staged a dance that many believed was a racist act of cultural appropriation. In an email to the student body, Christopher Eisgruber, the school’s president, criticized the performance as “inexcusably offensive.” He also said that the controversies such performances provoke “may be genuinely painful, but they are also fundamental to the life of any great University.”

Asanni York, a junior and Black Justice League member, took to Twitter to note that the swift response to the anti-Semitic fliers appears in contrast to how the university has responded the past incidents of threats against black students, including a bomb and firearm threat against black students after the Black Justice League ended a 33-hour sit-in at the president’s office to protest racial injustice.

“I thought controversy was necessary for conversation and growth? Eisgruber said that. Or only when it’s aimed at Black students?” York tweeted.

York said in an interview that he supports the university “being proactive and taking steps to protect the students,” but also said that he feels the university is being selective in how it approaches incidents of bigotry.

Josh Roberts, president of the Student Board of the Center for Jewish Life, said in a statement to the Daily Princetonian that many student groups have reached out to the Jewish community on campus to show solidarity: “We are sincerely grateful for all of our peer organizations and friends who are reaching out with support and kindness in the face of hatred.”

Protests, which spread and intensified nationally after the uprising at the University of Missouri, yielded in some cases major leadership overhauls and in others heated discussions about how universities should reckon with racially complex histories.

Some argued that the protests by students — such as those at Yale, which included anger at a faculty member’s alleged lack of sensitivity after she questioned a warning to avoid Halloween costumes that might be offensive — stifled free speech and had a chilling effect on open discourse in places where argument and debate are central concepts of learning.

The flier incident at Princeton came a week after Eisgruber said in an interview with the Indian Express that Princeton, in upholding its values of open debate and deliberation as an educational institution, would tolerate students holding a commemoration for Osama Bin Laden.

“We would and should tolerate that. It would be very disruptive. People would be very angry about the statement. But we would not discipline somebody for making statements of that nature,” Eisgruber said in the interview.

Pullan, the Princeton spokeswoman, said there is a significant difference between the anti-Semitic flier attack and someone within the Princeton community speaking.

“This is something that has come from outside, and this is an exploitation of our printers,” Pullan said. “It’s not a student body or a member of the community speaking, so those two things are not comparable.”