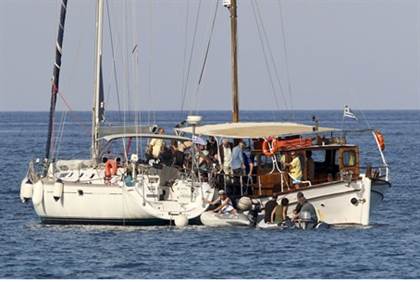 The Haifa District Court agreed on Sunday to the government’s request to confiscate the Gaza-bound flotilla Marianne which tried to break the naval blockade around the Gaza Strip in June, 2015. The activists on the ship were arrested by the Israeli Navy and deported.

The confiscation is the first time an Israeli court has approved a confiscation request based on the 1864 Naval Prize Act, a British law regulating confiscation of pirate ships and bounty distribution.

After examining the legality of the Israeli blockade, the legality of the seizure of the ship by the navy and the grounds for confiscation, Justice Ron Sokol ruled, “The State of Israel fulfilled all its humanitarian obligations as required by the laws of war applicable at sea… The situation of the Gaza population does not justify annulling the naval blockade.”

“The Marianne sailed to Israel with the explicit intent of breaking the blockade, the owners (of the boat) knew about that goal and they knew the ship could be confiscated. And since this was the clear aim of the journey, there is indeed ground for confiscation,” Sokol concluded.

The Court also fined the respondents NIS 25,000 as compensation to the State of Israel.

The Marianne ship, which sailed from Greece with Arab Joint List MK Basel Ghattas on board, was part of the Swedish organization “Ship to Gaza” protest flotilla.

Israel first tried to confiscate a Gaza-bound ship, the Estelle, in August, 2013, following the ship’s attempt to bring concrete and toys to the enclave in the fall of the previous year. The government’s request was rejected by the Haifa District Court, and later by the Supreme Court in August, 2016, citing the 10-month delay between the apprehension of the ship and the time the State filed the confiscation petition.

Justice Ron Sokol, who also ruled on the Estelle case, wrote in the Marianne verdict, “The statute of limitations has not expired and the supplicant [Israel] has completed all preliminary requirements. I also find that the naval blockade imposed on Gaza waters fulfills all technical requirements related to imposing such a closure.”

The confiscation requests were part of an Israeli strategy aimed at discouraging flotillas from attempting to break through the blockade surrounding Gaza. Israel established the blockade after Hamas took over the Gaza Strip from Fatah.

This new ruling also follows on the heels of a 22-member European Union (EU) delegation to Gaza in early November, calling for the removal of the Gaza blockade.

“The EU calls for all the parties to take swift steps to produce a fundamental change to the political, security and economic situation in the Gaza Strip, including the end of the blockade and full opening of crossing points, while addressing Israel’s legitimate security concerns,” stated Ralph Tarraf, head of the EU delegation to the West Bank and Gaza.