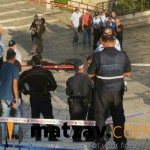 Recently,  as Israeli security forces have often responded to knife-wielding Palestinian attackers by shooting them dead, they have been criticized, not just by Arabs and Palestinians, but even by U.S. government officials and international and even Israeli humanitarian organizations for utilizing “excessive force”.1 Israeli Defense Minister Moshe Yaalon considers this preposterous: “We are using excessive force? If someone is wielding a knife and killing people, [then our response is considered] excessive force? What are we talking about here? This is nonsense.”2 In this article, we considerhalachah’s perspective on the use of lethal force to counter a lethal threat where non-lethal action would be sufficient to neutralize the threat.

The Obligation To Utilize Non-Lethal Force

The halachah is that the dispensation to kill a rodef (“pursuer” – i.e., someone pursuing someone else with lethal intent) does not apply where thenirdaf (“pursued one” – i.e., the rodef’s target) can be saved3 by merely maiming the rodef. A rescuer who nevertheless chooses to utilize lethal force is guilty of capital murder,4 although it is disputed whether this means that a [terrestrial] court will actually execute him.5

From a practical perspective, the obvious difficulty is ascertaining whether non-lethal force is really a viable alternative. Police officers commonly retort to those who criticize them for the use of excessive lethal force that “shooting to wound doesn’t make sense scientifically, legally or tactically”.6 The Talmud itself cites contention over this point as far back as the era of the Neviim: During a military clash between the forces of David Ha’Melech and those of Shaul Ha’Melech’s son Ish Boshes, Asahel (a member of the former) pursued Avner (a general of the latter), and Avner was forced to kill Asahel in self-defense.7 Asahel’s brother Yoav subsequently avenged his death by killing Avner.8 The Talmud relates that when Yoav was challenged over this murder, he asserted that he was the go’el ha’dam (“blood avenger”)of Asahel, whom Avner had unjustly killed. Upon being told that Asahel was a rodef, Yoav retorted that Avner should have tried to neutralize him using non-lethal means, and in response to the suggestion that Avner had been unable to, Yoav pointed out that Avner’s death blow against Asahel had exhibited extraordinary precision in its lethality, and that it was therefore inconceivable that he would not have been able to neutralize him using non-lethal means.9

The basic idea that the nirdaf himself has more latitude to save himself by killing the rodef than other rescuers have, has precedents in the rishonim: there is an opinion that while a rescuer must generally warn the rodef before killing him, the nirdaf need not do so, “as he is urgently concerned with his life, to save himself”,12 and there is an opinion that a woman whose difficult childbirth is endangering her life may destroy her fetus in order to save herself even after its head has emerged, despite the fact that others may not do so on her behalf.13

3 The Talmudic phrase “niten le’hatzilo” may refer to saving either the nirdaf from death, or the rodef from the perpetration of murder. See Tosafos Sanhedrin 73a s.v. le’hatzilo; Hagahos Ve’Chidushei Ha’Rashash ibid. 49a.

9 Sanhedrin 49a. It is not entirely clear whether Yoav’s defense asserting that Avner’s failure to utilize non-lethal means rendered him a murderer was accepted; see Yad Ha’Melech and Tzitz Eliezer cited at the end of n. 11. A subsequent passage in the Talmudic discussion has this debate taking place between Yoav and Avner himself prior to the former’s murder of the latter.