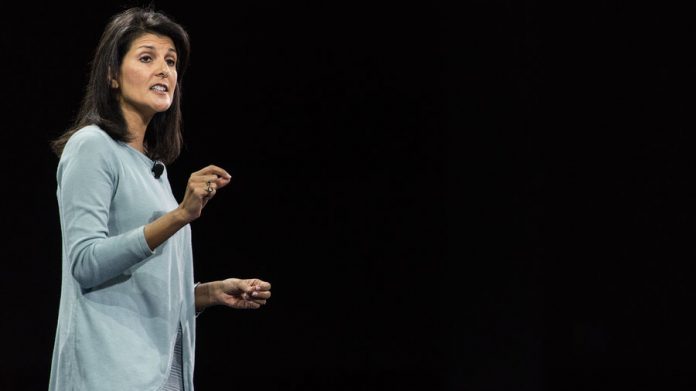 U.S. Ambassador to the United Nations Nikki Haley broke rank with the White House Wednesday by telling the Christian Broadcasting Network, “I believe that the Western Wall is part of Israel.”

Although Haley clarified she does “not know what the policy of the [Trump] administration is,” she reiterated her assertion, stating, “We’ve always thought that the Western Wall is part of Israel.”

In the same interview, Haley also drew a contrast with other administration officials by saying Israel’s capital city “should be Jerusalem” and that “the [U.S.] embassy should be moved to Jerusalem” from Tel Aviv. Secretary of State Rex Tillerson had expressed a more cautionary tone on the possible embassy move in an interview with NBC’s “Meet the Press” May 14, saying President Donald Trump “is being very careful to understand how such a decision would impact the peace process.”

Haley’s comments came in the wake of a diplomatic spat between Israeli and American officials, who are planning Trump’s May 22-23 visit to Israel. David Berns, political counselor at the U.S. Consulate in Jerusalem, reportedly told his Israeli counterparts the Kosel “is not in your territory.” The Trump administration quickly disavowed the statement, but has stopped short of definitively saying the Western Wall belongs to Israel.

At a White House press conference Tuesday, National Security Adviser H.R. McMaster declined to say whether the U.S. considers the Kosel to be part of Israel, saying the matter “sounds like a policy decision.”

Trump has indicated he is considering officially recognizing Yerushalayim as Israel’s capital, but his current position on his election campaign pledge to move the U.S. embassy to Yerushalayim remains unclear.