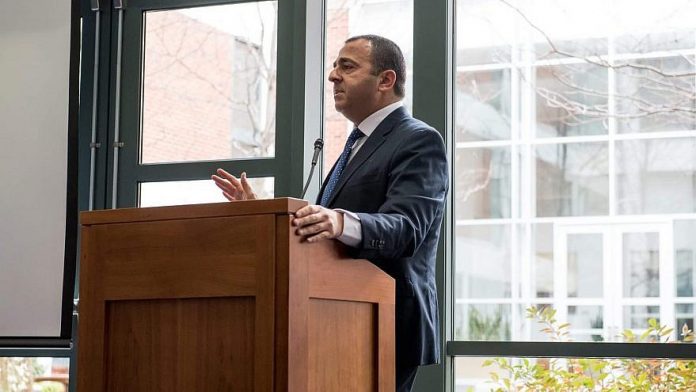 A former Israel Defense Forces’ Deputy Military Advocate General is on mission to bring the complexities of Israel’s battle against ruthless terrorist organizations to campuses across the United States and Britain.

Col. Eli Baron told JNS in an exclusive interview that his goal is to decrease the enormous and “inconceivable” gap that exists between the way that international audiences perceive Israel’s military operations and the lengths that Israel’s military goes to minimize civilian casualties.

Baron, who spent more than 20 years in the IDF’s Military Advocate General’s Corps, and three years at the IDF’s National Defense College, has already spoken at Harvard University, the University of Pennsylvania and the University of Michigan in recent days. He will also speak at Cornell University, West Point Military Academy and King’s College in London, among several other campus venues. The tour has been organized by the Our Soldiers Speak organization

The following is a transcript of the interview. It has been edited for brevity and clarity.

Q: Can you describe how audiences on American campuses have been responding to your talks?

A: No audience enters the talk and leaves it in the same way. They discover a gap between what they think and what they hear from us. There are sometimes military personnel among the audiences who tell me, “We ourselves were in combat in Afghanistan and Iraq. We understand how much effort is needed to make these efforts to minimize harm to civilians, and the effort you are making is incredible.”

Others still struggle with the high number of casualties from conflicts such as “Operation Protective Edge” [Israel’s 2014 conflict with Hamas in Gaza]. This is the nature of operations that take place in circumstances that are very different from those in a discussion room at a university. When you deal with organizations that force these conditions on us, we can’t ensure low numbers of casualties, but we make every possible effort to decrease those numbers.

Q: What motivates you to travel abroad and reach these audiences?

A: The IDF invests heavily to ensure that all of our operations are in line with international law. In many ways, we are world leaders in this field. We go above and beyond what international law requires. Yet this fact is lost on so many around the world. In the face of this gap, we could throw up our hands, and say, “We will do what we know is right.” But I don’t believe in that approach at all. I believe that if we don’t update the international community on what we are doing, it’s as if we did not do it.

My goal isn’t to make everyone automatically pro-Israel. But rather, when they hear of events in the future, they will not rush to judge us. They will remember that they heard me once, and that things are not as simple as the television report they saw suggests. The point is to get them to replace exclamation marks with question marks.

Q: A great change has occurred on the Middle East’s battlefields. With traditional state armies less in the picture and terrorist entities taking their place, can you describe what Israel is facing? How do Israel’s current adversaries try to “level the playing field” with the IDF?

A: They feel that they are out of the international state game and are therefore free from its dictates. They do not feel obligated by international law. This is clearly visible in their activities, in how they engage with us, and in how they deal with their own civilians.

One example of this is the principle of distinction in international law, which holds that there must be a separation between combatants and civilians. Our adversaries do exactly the opposite. They deliberately disguise their combatants as civilians and launch attacks using human shields to protect their combatants. This gives them greater freedom of operation, and it is also an attempt to get us to harm their civilians, which then gives them points against us in the court of global public opinion. This is how they try to cut down our military advantage. Only an organization that does not care about the lives of its civilians can act this way.

Hamas turned private homes into command and control centers. It hid weapons in homes. They had no problem hiding missiles in the basements and rooms of homes with children inside. This is their modus operandi. We know this also exists in Lebanon.

This is what people in the world don’t understand. What would happen if they cut the fence and reached Israeli communities a kilometer or two kilometers away? If we don’t stop the mob in time, they will storm houses. Some might only damage or loot them. But dozens of these people are Hamas terrorists who, once they get the opportunity, will kill Israelis. This is lost on the world.

Hezbollah’s arsenal of approximately 120,000 to 130,000 rockets and missiles is mostly concealed in civilian residential buildings in Lebanon, as well as in sites like medical clinics, meaning that any future war will place Israel in a very difficult situation.

We need to protect the Israeli civilian population, and we will do that. On the other hand, we need to conduct operations in a way that minimizes harm to civilians on the other side. This is very hard to do when the enemy uses its civilians to protect their weapons. We use our weapons to protect our civilians; they do the opposite.

Such tactics also have an effect on the principle of proportionality in international law. Proportionality holds that the extent of collateral damage from a military strike should not be excessive in relation to the military gain. Of course, as soon as you mix civilians and military targets, it becomes very hard to distinguish that, and we go to unbelievable lengths to make sure we are both successful in accomplishing our military mission, and at the same time, are carrying out only clearly lawful attacks on military targets.

Q: What does the IDF do in the face of such complex challenges?

A: The IDF has developed a range of methods avoid harming noncombatants. We have developed an advanced system for alerting civilians of imminent strikes, giving them a chance to evacuate. When feasible, we also use “roof knocking”—the practice of dropping empty or low munitions on the roofs of structures, giving civilians who did not heed those warnings a second chance to escape before a strike. It saves lives. Sometimes, we also cancel attacks even after a missile is in the air when circumstances on the ground change, and we see civilians approach targets. We invest a lot in precision intelligence to achieve this. These techniques allow us to hit the enemy without hitting civilians, despite the fact that the enemy wants us to hit their civilians.

In situations where enemy targets are surrounded by large numbers of civilians to an extent where the collateral damage might be excessive, the IDF will not strike. “Operation Protective Edge” resulted in some 2,000 casualties on the Palestinian side, half of which were combatants and the other half were civilians. Every loss of civilian life is tragic. But this ratio is far lower than other civilian-to-combatant ratios in the world. There were more than 6,000 air attacks in that conflict and thousands more from ground platforms.

The IDF is always investing more in this—learning, improving intelligence and developing technology for accurate strikes. I travel the world and speak with colleagues in other militaries. I can say with full confidence that we have nothing to be ashamed of in this field. We have at the very least the same standard as other modern militaries, and in many ways, we are ahead of them. Delegations that visit us have people telling us, “Why have you raised the bar so high? It will be hard to match it.”

Q: Israel faces intense international media criticism over the months of Gaza border rioting, violence and the resulting number of casualties since the Palestinian unrest started on March 30, 2018. How do you see this situation?

A: The main problem is the lack of understanding about what these events are. No other state has to deal with something like this. Many states have protests, true, but the context is what makes all the difference.

In this case, the Gaza violence is not the result of civilians who are sick of their situation and go out to demonstrate, but rather, they are incidents organized by a terrorist organization that has been locked in an armed conflict with us for many years. At first, they sent suicide-bombers, then they fired rockets, then they dug terror tunnels. All of these techniques failed, so they invented new tools. This is an adversary that also thinks and evolves.

These are not peaceful protests. Hamas takes full responsibility for it. It pays bus drivers to bring the people, it pays the wounded and the families of the casualties. It sets up camps for them, and I heard it even sets up Wi-Fi connections there. It tells people to burst through the border fence as an objective. It brings tens of thousands of people to the border—some of whom are women, children and the elderly, and hundreds of which are armed Hamas members. They have grenades, explosive devices, firearms and fence-cutting equipment, and they hide behind huge smokescreens created by thousands of tires they burn.

This is what people in the world don’t understand. What would happen if they cut the fence and reached Israeli communities a kilometer or two kilometers away? If we don’t stop the mob in time, they will storm houses. Some might only damage or loot them. But dozens of these people are Hamas terrorists who, once they get the opportunity, will kill Israelis. This is lost on the world.

In contrast, the “yellow-vests” protesters in Paris have no intention of killing anyone. They are civilians of a state, not of an enemy entity. They don’t try to burn down fields or send explosives over the border like Hamas does.

The IDF’s rules of engagement in dealing with the Gaza border violence have been approved by the attorney general to the government, and a three-judge High Court panel, which responded to petitions by human-rights organizations. The High Court, which has such a respected reputation, found nothing illegal, although the implementation of the rules was not part of its scrutiny yet, as this is an ongoing operation. This has great significance in a law-abiding democracy.

Q: Despite all of the IDF’s many efforts to limit harm to noncombatants, the threat of an investigation by the International Court of Justice in The Hague continues to loom. Is this a threat to commanders and decision-makers who are defending Israel’s south?

A: The Hague becomes involves when it finds that the state is either unwilling or unable to deal with the situation by itself. Fortunately, this is not the situation here. The IDF has mechanisms for examination and investigation. Israel’s civilian legal systems do, too. Any time that a suspicion arises that the rules of war have been violated, the IDF investigates seriously. Where it is necessary, trials result. We also make sure that all of our operational procedures will always be more restrictive than international law itself.