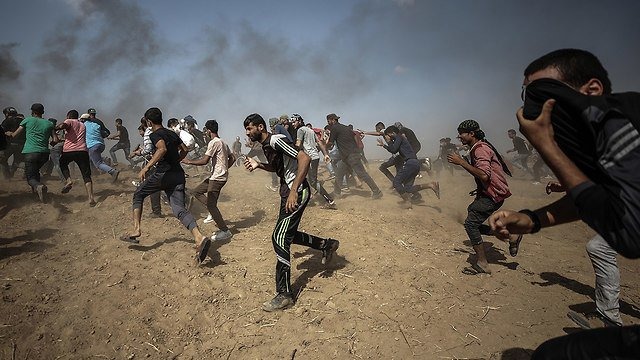 Hamas will escalate hostilities along the Gaza Israel border on Friday, unless Israel allows the transfer of monthly financial aid from Qatar to the Gaza Strip and increases the electricity supply to the coastal enclave by then, a senior Hamas official told Lebanese newspaper Al-Akhbar on Monday.

According to the Hamas official, Hamas was once again calling on Egyptian, Qatari and U.N. mediators to pressure Israel to implement its ceasefire understandings with the terrorist organization. The matter was urgent, the official said, due to the “seething atmosphere in Gaza,” which could lead to the renewal of “independent acts” and attempts to infiltrate Israel.

The warning comes amid heightened tensions in recent days in southern Israel. Rockets were fired from the Gaza strip on Friday and Saturday nights at Israeli communities. One of the rockets struck the city of Sderot; on Saturday night, paramedics treated six people suffering from shock.

Palestinian media reported the Israeli airstrikes targeted a Hamas outpost in the Tuffah district of Gaza City, as well as sites in nearby Jabalia and Khan Younis.

Shortly after midnight on Sunday, a group of armed Palestinian terrorists was engaged by IDF troops as they attempted to breach the Israel-Gaza border, in what an IDF spokesperson described as a “serious security incident.”

An Israeli attack helicopter and tank opened fire at the would-be infiltrators, according to the military. Palestinian medics said they retrieved three bodies from the site, and Gaza hospital officials said a fourth man was wounded.

Meanwhile, Palestinian media outlets have reported that Qatari envoy Mohammed al-Emadi was expected to arrive the region on Wednesday.

He is expected to meet with senior Israeli officials and then continue to Gaza, where he will meet with Hamas leaders in an effort to preserve the ceasefire agreement and secure the transfer of Qatari aid money to Gaza.