Spoiler alert: Harry Potter is dead. Not the bespectacled teenage wizard created by author J.K. Rowling. This deceased Potter was a British soldier killed in 1939, and his grave is helping draw tourists to the backwater Israeli town of Ramle.Ramle does not keep numbers on how many tourists flock to the grave in the town’s British military cemetery, but tour guides and the municipality say the tombstone has become a popular attraction, largely for domestic travelers.

“There is no connection with the Harry Potter we know from literature, but the name sells, the name is marketable,” said Ron Peled, a tour guide who said he has brought dozens of groups to the grave. 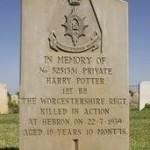 Pvt. Harry Potter was born near Birmingham, England, and joined the British military in 1938. According to his regiment’s website, he arrived to British mandate Palestine later that year, where he was killed in battle with an armed band in 1939. He was 18.

The tombstone says, incorrectly, that he died at 19 – a result of him having lied about his age so he could enlist.

The municipality said people began inquiring about the grave about five years ago, and the city listed it on its tourism website at the start of the year.

On a recent afternoon, a group of Israeli visitors, led by a microphone-wielding tour guide, scoured the manicured cemetery, looking for Potter’s tombstone. Once they found it among the 4,500 graves, they huddled behind it and snapped photos.

“It’s a type of pilgrimage for some man whose name stands out. If you didn’t say that Harry Potter was buried here, no one would come here,” said Josef Peretz, 76, from Tel Aviv.

Thousands of tourists visit Ramle, a drab, working-class town in central Israel, every year, in large part because of its many archaeological ruins and convenient location, according to the municipality.