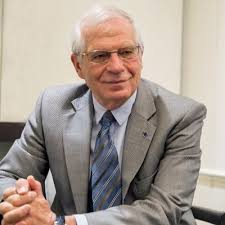 This week, the man who has said Israel just has to live with the fact that Iran wants to destroy it was nominated to be the foreign policy chief of the European Union, putting him in the position where he would be likely to succeed EU Chief Federica Mogherini in November.

As The Times of Israel reports, Spanish Foreign Minister Josep Borrell’s appointments must still be confirmed by the European Parliament. Borrell, a member of his country’s ruling Socialist Workers’ Party, is complacent about the fact that the despotic theocratic Iranian regime wants to destroy Israel, telling reporters about Iran leaving the nuclear deal that “It would be very bad for us if it goes on to develop a nuclear weapon … Iran wants to wipe out Israel; nothing new about that. You have to live with it.”

Bas Belder, a Dutch member of the European Parliament who is strongly supportive of Israel, tweeted, “More difficult times [are] ahead between the EU and Israel I fear.”