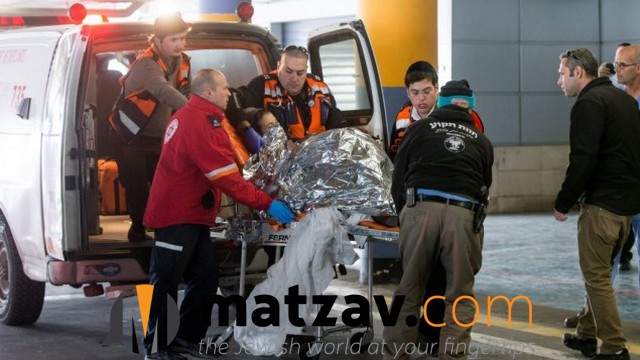 Has every day here in Israel become one long Purim paaar-tey, where we’re throwing back the booze until we can’t recognize the difference between the cursed Haman and the blessed Mordechai? Between another potentially fatal terrorist attack and a youthful game of ding-dong-ditch?

Michal, my dear, did I read correctly in yesterday’s article — Tekoa Stabbing Victim Says Attacker Didn’t Mean to Kill Her — that you were honored with your own designated terrorist, whose knife schechted your precious flesh and endangered your unborn baby’s life, yet you naively believe he meant only to give you a little fright? That you feel he was just a confused kid with vacillating eyes, weak on conviction so now we should all just restart this recess game of two-square (or is it four-square — Obama, Iran, the Arab world and us Jews) all over again? Friendsies!

It is out of care and my loyalty to you, which is to say us, not criticism, that I write these words. My loyalty feels like jello slipping through my fingers. How can you slink away now? I grip, but you slip. Anger, fear and confusion are perfectly legitimate emotions for you to feel.

Please, let me explain. I know you need to recover, your pain must be excruciating and now is hardly the time for lobbing criticism at a terror victim. But your view is irresponsible — for us all.

Michal, as I rode the bus to Jerusalem on Monday, cobbled mutterings of a stabbing caught my ear. You know the routine — I leaned over the armrest of my seat, half my body in the aisle straining to cull meaning from the snippets, the bits of voices low, and heavy with sympathy for you; the current rushing into my veins as the picture became clear — one unified voice of Am Israel sharing our news of your pain.

“A pregnant woman!” I slunk in my seat, alone, but with you and against him. As if the power of my allegiance would somehow make a difference.

I hear you, he was young, you suggest he was pressured, confused and only wanted to do his part, make his dad proud of him, while secretly hoping not to get killed in the process. But chamudah, when a physically mature male grabs his mom’s cleaver or darning shears, or his dad’s Boy Scout knife, his culpability remains. This was a premeditated attempted murder, because you are a Jew, not stealing the milk money for the teacher.

Would your husband and family forgive and excuse him if you, chas v’shalom, hadn’t been so lucky? If his knife had hit a more vital organ or vein? What about your unborn child? And what about the next 15 year old who determines to ‘bring honor to his family’ at the expense of two Jews, one living, one yet to be born?

No, there is no mitzvah to be found in sympathizing with your enemy.

Let me ask you this — if one of us Jews were drunk behind the wheel on Purim and, chas v’shalom, a child, a woman, an Arab, Jew or Christian were killed or maimed, would, “But it’s Purim; I was drunk. It’s a mitzvah!” remove culpability? Right a wrong? Send the right message to other revelers?

We’re midway between Chanukah and Purim — there’s plenty of light, and no, we’re not yet drunk. We need to take the strength of the Maccabees and the spiritual emunah of Purim and pull together. If not for us, then for the next generation — for Dafna’s children, for the Henkins, the Fogel kids, and for yours.

This article first appeared at Times of Israel.