-Communicated- When 19-year-old David A. made it into the elite Paratroopers Brigade of the IDF a few months ago, he could never have imagined that a short time later he’d be incapacitated in a hospital bed.

David A. is one of eleven children in a close knit, happy family living in Beitar. Shortly after he began his army service as a paratrooper, he started to feel nauseous and began vomiting. He was sent to the doctor, with most people assuming he was simply dehydrated and would need extra fluids and some rest-a common condition that happens to soldiers during training. After running some tests though, an unthinkable diagnosis was made: David had GBM, one of the deadliest types of brain cancer.

David and his family were floored by this news, which hit them hard and from out of nowhere.

Who could have thought that such a young, healthy man in his prime, could be stricken with a fatal disease?

GBM attacks rapidly and aggressively. Though David underwent chemotherapy and radiation treatments, neither could stop the cancer or slow it down. Once the doctors determined that there was nothing else they could do for him, there was no choice-he went into hospice. 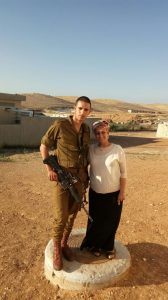 Shoshana and Yaakov, David’s parents are devastated. Shoshana made the decision that the only place for their son to live out his remaining time is at home, surrounded by family. In order to take care of him she left her job as an art teacher so she can be there for him every hour of every day. This took a big bite out of the family’s finances, but she feels that as David’s mother there is nothing else she can be doing with her time.

David’s siblings are completely dedicated to him as well. They spend as much time as possible with him, talking to him and keeping him entertained. At this point he can hear but can no longer speak. He can’t eat regular food and he can’t move any part of his body on his own. He needs so much care that two of his siblings left their jobs and studies respectively, to help out at home.

Understandably the atmosphere in the home is one of desperation and despondency. The family life has broken down, as everything revolves around David’s situation. Shoshana is especially suffering from her son’s deterioration as she spends every minute taking care of him and sees his decline from moment to moment. Due to her loss of income there is no food in the refrigerator. Her youngest son is almost 13 and should be in the middle of planning for his Bar Mitzvah during Sukkot. But as there is no money, time or frame of mind for it, no Bar Mitzvah is being planned.

The circumstances in this story are so dire and we need to help David ben Shoshana’s family as soon as possible. Please help us collect $5400 for them, which will go towards:
-pain medications for David
-basic household needs to alleviate some of the chaos in the home

-a small Bar Mitzvah celebration for the family’s youngest son

The motto of the Paratroopers Brigade is “Acharai!” (follow me!). Help us show David’s family that we are behind them and that we will do our best to help during this tragic time.