When ger tzedek Eliyahu Richardson and his wife made Aliyah from New York in 2013, they were elated to ‘live the Eretz Yisroel dream.’ Quickly, however, they saw that life would be more complicated than expected.

Their story was written up in Mishpacha magazine, a testament to his inspiring mesiras nefesh.
Despite dressing and behaving in every way as a mainstream Torah Jew, however, Eliyahu’s African American heritage was apparent to all who saw him. He struggled to be accepted into his Jerusalem community, and, despite being an award-winning writer, he was forced into manual labor to make a living.
Inspired to make a living for his children and determined to continue his journey of growth, Eliyahu accepted his work at the grocery store joyfully. His optimism was shattered, however, when his legs were severely injured at work. He was knocked off of his feet, both figuratively and literally.
The couple applied for disability through Israel’s national health insurance but like many attempting to navigate the arduous bureaucracy, were denied. That is when the debt began.
Wife Chaya Richardson works as an English teacher and Eliyahu, in addition to his daily learning seder, has started a new business. Unfortunately they are still far from financially stable. This week, there situation took a turn for the worse: now five months behind on their rent, they have a shocking two days to pay their debts or they will be out on the street.
Mother Chaya, understandably, is terrified to be homeless with five small children. Unfortunately, the young family has no one to lean on for support.
Most religious Jews are familiar, from as early as childhood, with the mitzvah of loving the ger. Despite that knowledge, however, often converts are ostracized and excluding, left struggling to handle the logistics of a religious Jewish life alone.
Those who wish to come to the aid of this frightened family can do so here. 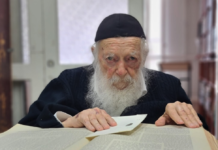