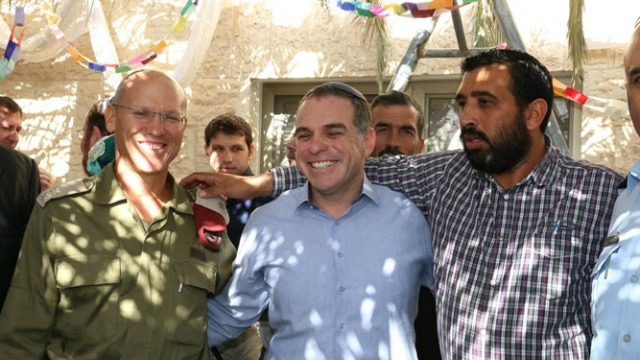 The head of a major Jewish community in the West Bank is calling on the Palestinian Authority (PA) to “immediately release” three Palestinians who were arrested after they visited his sukkah earlier this week.

“It is absurd that having coffee with Jews is considered a crime,” Oded Revivi, the mayor of Efrat and the chief foreign envoy of the Yesha Council, told The Algemeiner on Friday. “Once again, the Palestinian Authority has proven it would prefer to fan the flames of conflict instead of working to bring people together.”

The Sukkos celebration was attended by dozens of Palestinians from villages near Efrat, a town located in the Gush Etzion region south of Yerushalayim.

“We consider ourselves part of the family, part of the people of Efrat,” Ahmad Mousa, a resident of the nearby village of Wadi Al Nis, was quoted by the Washington Post as saying.

Israeli media outlets reported later on Thursday that three of the Palestinians who had gone to Revivi’s sukkah had been detained by PA security forces.

The deputy mayor of Bethlehem — the largest Palestinian municipality in the Gush Etzion region — called the visit “dangerous” and said the Palestinians who took part in it would be held accountable, Israeli-Arab journalist Khaled Abu Toameh reported.

Ofir Gendelman, the Arab media spokesman for Israeli Prime Minister Benjamin Netanyahu, tweeted Friday: “The PA tells the world it wants peace but in reality it arrests and threatens Palestinians who support neighborly relations with Israelis.”

In an interview with The Algemeiner last month, Revivi spoke about the anti-Israel Boycott, Divestment and Sanctions (BDS) movement, saying the main victims of BDS are the Palestinians themselves.

“[BDS] does not serve the interests of private Palestinian individuals,” Revivi said. “It has an agenda that is remote from the needs of the Palestinian people and it jeopardizes the potential of reaching a peace agreement.”