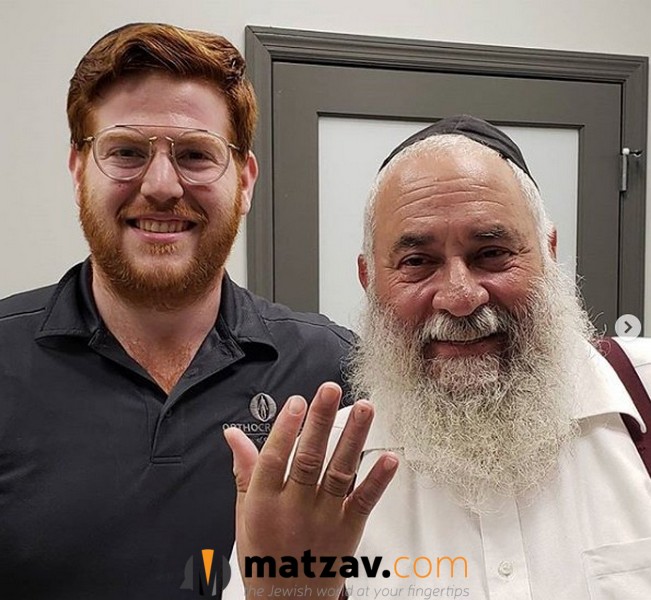 Rabbi Yisroel Goldstein, who was injured in the shooting attack at Chabad of Poway in California this past Pesach, has received a prosthetic finger to help his hand function properly.

Rabbi Goldstein was about to deliver a sermon on the final day of Pesach when a gunman entered his synagogue near San Diego and opened fire, killing community member Lori Kaye. The rabbi was miraculously saved but lost a finger in the attack.

At his public appearances following the anti-Semitic attack, during press conferences, public lectures and a highly visible meeting with President Donald Trump in the White House, Rabbi Goldstein was seen wearing a blue cast which covered his hand.

This week, the cast was removed as he visited Orthocraft Prosthetic and Orthotic Services in Brooklyn. The center provides technologically advanced orthotic, prosthetic, and pedorthic care in the New York and New Jersey areas.

“It was an honor to meet Rabbi Yisroel Goldstein of Chabad in Poway and help him restore his hand and function,” said Sam Heifetz, who is a third-generation prosthetist, who felt from an early age the calling to help restore function to the amputee community.

“His lost finger during the horrific attack in his synagogue is a physical reminder of hate but his counterattack of inner strength, trust in God and bringing good to the world sheds light over and over,” Heifetz commented on social media.

Heifetz told COLlive.com: “This type of prosthesis is technically called a High Definition Silicone Restoration or lifelike prosthesis. It affixes to his hand in a similar way to a glove. And can be easily donned and doffed.”

He said it is custom-made from a silicone mold taken off both the patient’s hands. The missing finger is then copied based upon his existing finger from his other hand and hand-painted from the inside to exactly match his skin shading, hair and nails.

“The fit is so exact that once it’s on it stays via suction until he removes it,” the expert said. “It’s not designed for 24/7 wear and is taken off for sleeping.”

He added that the concept is “fascinating and amazing to be sure but not quite what was lost.”