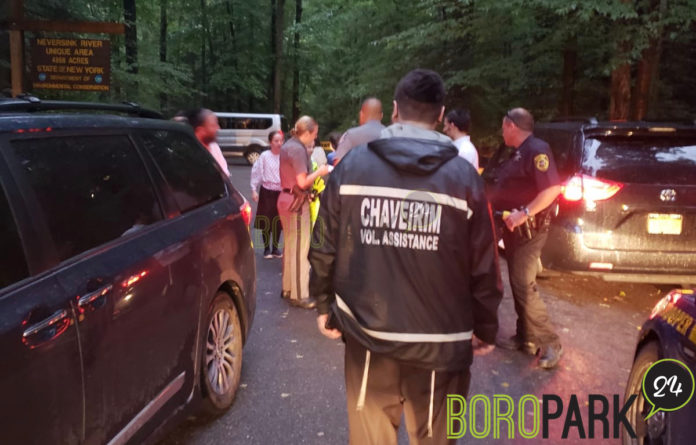 BoroPark24 reports: A large heimishe family hiking on a trail in the Catskills found themselves completely lost in the woods and trapped in the rain, before being found and rescued by Chaveirim.

The family of 15 was hiking at the Neversink Gorge Trails near Rock Hill, NY when they realized that they had completely lost their bearings and were stranded in the woods. It then began raining, and they were stuck in the outdoors without means of shelter, making a tough situation more difficult.

Fortunately, they were able to make a call to Chaveirim and asked to be rescued, though they were unable to offer much of a description of where they were and how they could be found.

Chaveirim dispatched their members to the area and met up with the Sullivan county sheriff and state troopers, dividing into two search parties entering from opposite ends of the trail in order to close in and locate the family. The two groups combed the trail until they located the family with children aged six months to twenty years old, who were all thoroughly drenched.

Catskills Hatzalah then arrived on the scene to treat any potential emergency medical needs of the family as a result of the ordeal, and were able to confirm that everyone was alright. Read more at BoroPark24.