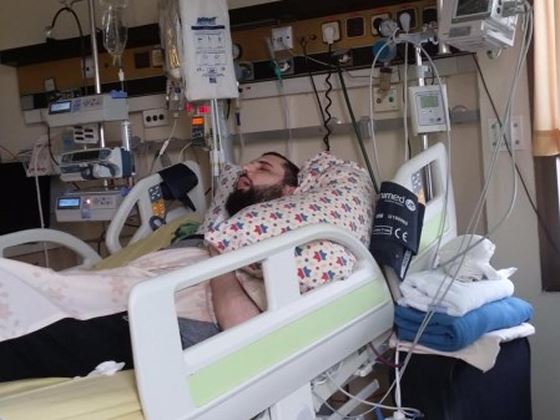 -Communicated- Moshe Arazi is a young man with an unusual story. He is a 27 year old Israeli, currently in the US for medical treatment. He is battling Behcet’s syndrome, a rare autoimmune disease that attacks blood vessels, joints, and internal organs. Moshe unfortunately has the distinction of being one of the most severe cases of this disease that doctors have ever seen, both in Israel and the US.

The doctors in Israel were unable to offer any treatment for Moshe’s condition, so on the advice of Rav Chaim Kanievsky he travelled to the US on a special medical transport for treatment. The doctors in the rheumatology dept. at Mt. Sinai Hospital in NY have been able to offer a glimmer of hope for a treatment that hopefully will improve his condition.

Moshe has always been a fighter. He was a soldier in an elite commando unit in the IDF and he was seriously injured in the Gaza war. As a newly married couple a few years ago, he and his wife Leann legally adopted her six siblings and took upon themselves the support of this extended family. Leann’s mother had died a few years before, and her father was neglectful and abusive. Leann herself suffers from kidney disease and has been the beneficiary of two kidney transplants. Moshe and Leann need our help in continuing this support while he is undergoing treatment in the US.

Moshe is also a fighter in another way. Both he and his wife were raised in irreligious homes, and both of them have not only become completely shomrei mitzvos, but they have become instrumental in bringing others back to torah observance. Over the past few years, Moshe has been confined to a wheelchair as his condition worsened. Despite that, he has accompanied Rav Aryeh Schechter, a noted Kiruv figure on the Israeli scene, on many lectures and seminars to Baalei Teshuva in Israel. He has used his own ability to overcome hardships as a source of inspiration for others.

Now it’s our turn to help Moshe cover the cost of his treatment which will include major surgery, and the cost of supporting the family in Israel. Hopefully, through that he will be able to benefit from the lifesaving treatment being offered in the US, and he and his wife will be able to enjoy a full life together.

Moshe’s family is from Migdal Ha’emek in Israel, and Rav Yitzchak Grossman, the respected Kiruv pioneer behind the Migdal Ohr Institutions, is quite familiar with Moshe’s situation. In the US, Yitzchak Skolnik and Naftali Horowitz are familiar with the situation and can attest to the facts.  Any inquiries can be made to 347-405-1368.

Let’s join together and show them an outpouring of love and support.  Please donate generously.

For tax deductible receipts for contributions in excess of $360 please contact the creator of You Caring account through the donation page.

Moshe has been the subject in Mishpacha magazine click here to read the article.