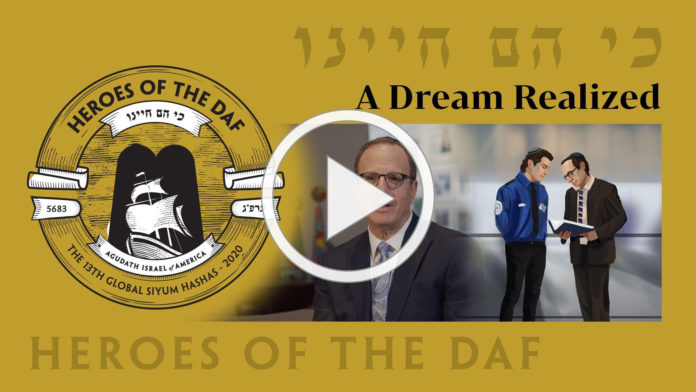 Become a fellow Yid’s Chavrusa in an instant
The lawyer from Washington, D.C. and the TSA agent from Columbus, Ohio. These two yidden did not know each other, yet in an instant became chavrusos.
It occurred when attorney Judah Lifschitz was in the Columbus Airport to catch a flight home after a day in court. During security screening, a TSA agent wearing a kippah serugah approached Judah to ask whether he had learned The Daf that day. After the attorney responded affirmatively, the agent asked him to explain The Daf as he had difficulty understanding it. It was a difficult sugya in Maseches Shabbos and the two spent twenty minutes discussing it – as the other TSA agents watched in amazement.
This was precisely the scenario that HaRav Meir Shapiro zt”l envisioned when he introduced the concept of The Daf at The Agudah’s Knessiah Gedolah in pre-war Vienna, years before commercial airline flights were scheduled: Two yidden, anywhere, instantly connected by a common Daf in Torah.
When over 100,000 yidden worldwide will iy”H join to celebrate the upcoming Siyum HaShas of Daf Yomi, they will all be connected through the Torah and the learning of The Daf. This will no doubt be the greatest demonstration of achdus and Ki Heim Chayeinu in contemporary history. Be a part of it!
To take part in this historic experience, please visit thesiyum.org to reserve your tickets for The Siyum while they are still available. For general information and updates, please visit thesiyum.org or text siyum to 313131.