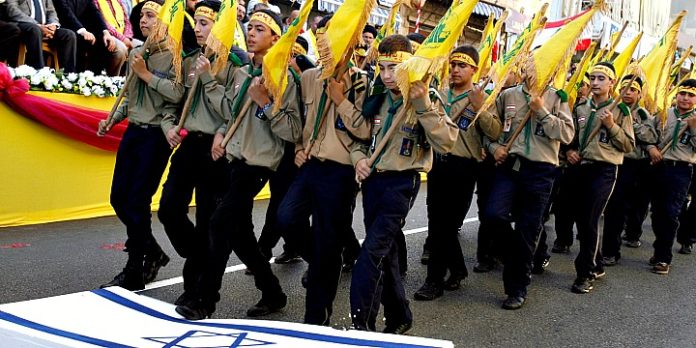 International efforts to counter the Lebanese terrorist organization Hezbollah need to be widened to include the group’s extensive network of schools and educational institutions, a new report to be released on Thursday asserts.

The report by the Anti-Defamation League (ADL) — an advance copy of which was shared with The Algemeiner — observed that with the effective takeover by Hezbollah of Lebanon’s government in January this year, the Iranian-backed Shi’a group “now wields greater influence over a broad range of Lebanese government policies than ever before.”

That includes the country’s education sector, which exposes thousands of students to antisemitic and anti-West incitement through textbooks, group activities, and similar means.

“This kind of antisemitic brainwashing depends in part upon the silence of well-meaning observers in order to succeed,” David Weinberg — the ADL’s Washington director of international affairs and the author of the report, titled “Teaching Antisemitism and Terrorism in Hezbollah Schools” — said in a phone interview on Wednesday. “International action to call out these hateful educational institutions is important as part of a broader strategy for combating Hezbollah terrorism.”

Although Hezbollah is designated as a terrorist organization by the United States, the European Union and some Latin American countries, the notion that the educational and welfare services it supports should be exempted from international sanctions still persists.

Among the examples cited in the ADL report was the participation of French diplomats in Lebanon in a 2017 conference dedicated to the Mahdi schools’ network — one of four school systems maintained and supported by Hezbollah, along with a boy scouts organization and an “education mobilization unit” that engages in propaganda work.

Weinberg pointed out that in Lebanon’s “fragmented” education system, 70 percent of schoolchildren attend private schools. The schools associated with Hezbollah, Weinberg argued, were critical to the organization’s recruitment strategy.

“You can’t convince someone to give up their life for terrorism against Jews and the Jewish state and America without systematically teaching that person from a young age that they are the enemy,” he said.

As the report makes clear, Hezbollah doctrine violently rejects not just Zionism and Israel, but Judaism and the Jewish people.

A school history textbook analyzed by the ADL “claims that Judaism teaches its adherents they are ‘the masters of the world and the emperors of the universe, which nobody is entitled to belong to, no matter his station’ and that ‘this is what made them hated and outcast, and perhaps what intensified people’s aversion to them: their unjustness, their arrogance, their greed, and their monopolizing.’”

Also notable is the contrast with Hezbollah’s more favorable attitude to Christianity. The same book, the ADL report notes, “teaches that Christianity arose ‘to correct the perversion of the Jews,’ including their supposed ‘greed, avarice, and monopolizing’ and to teach ‘love and equality among humankind in place of the Jews’ supposed haughty clannishness.”

Another lesson in the textbook features a young boy speaking with his grandfather about the “crimes of the Zionists in Palestine,” which are presented as the outcome of inherent Jewish malice across the centuries.

“[T]he Zionists are the enemies of humanity in the past, present, and future because of their attributes: deceit, treason, treachery, and breaking pacts,” the grandfather explains.

Observed the ADL report: “It is particularly striking to see the descriptor ‘Zionists’ used in this derogatory manner to describe even Jews during ancient times, but this is far from the only time the labels ‘Jewish’ and ‘Zionist’ are used by these schools in a rather interchangeable — and extremely negative — way.”

In terms of legislative measures outside Lebanon to counter Hezbollah’s indoctrination programs, Weinberg cited the case of a $700,000 fine paid by the American University of Beirut (AUB) — Lebanon’s leading higher education institution — “in response to a US lawsuit alleging that it had provided material support to several sanctioned entities associated with Hezbollah, allowing journalists from Hezbollah’s Al-Manar TV and Al-Nour Radio to benefit from AUB media trainings and allowing Jihad al-Binaa, Hezbollah’s construction arm, to recruit student volunteers via a campus database of NGOs.”

The example of the AUB “highlights the utility of US sanctions for deterring third-party actors in Lebanon or beyond from conducting business with entities that carry out illicit activities for Hezbollah,” the report argued.

It went on: “For law-abiding institutions of higher education in particular, such as AUB, it could be especially impactful for their decision-making process if the United States were to explicitly designate primary and secondary schools that are part of Hezbollah’s recruitment apparatus or complicit in its activities and that seek to send graduates to AUB.”

Weinberg stressed that governments around the world needed to maintain the understanding that “Hezbollah’s ‘social service’ wing is intimately bound up with the same organization’s terrorism.”

If those governments that have designated Hezbollah are “to effectively implement existing sanctions against Hezbollah in its entirety, then that requires paying attention to its front organizations,” he said.